After the cancellation of the first RG/DF65 Winter Series a few weeks ago due to high winds, a top suit wind from the clubhouse end, met the five hardy RG sailors for the second event. The fleet comprised of four Uno and one Scurry with the fleet all using their A rigs.

Neil Westbrook got of to a flyer winning the first race. John Brierley then got into his stride winning seven of the ten races with Dave Williams having a well deserved win in one race and Neil finishing, as he started, with a win in the last race. Charles Legg and Alan Watkinson were “in the mix” for most of the races and there were some close finishes.

Thanks to Bernie for running the racing especially when the timer failed and he had to call the time. Next week (is the club IOM Christmas Race, one of the highlights of the Birkenhead RS&PC season.Entry may be made until late on Friday via the event page here

In this the last of the 2021 Summer series for both the RG65 and DF65, sailors had to contend with a wide range of wind conditions in strength (0-10kts) and direction (anywhere from NW to SW), although at least the sun shone to warm up proceedings after the morning rain.

The RG65’s started in a low aspect A rig in the stronger and gusty conditions, but most changed up to a full height swing rig after a couple of races as the wind moderated. Peter Baldwin won the first race before John Brierley had a string of 5 consecutive wins, helped in part with Peter not changing up with everyone else, assessing the difference in performance between rigs. After the break, Peter changed up to full height swing rig and proceeded to take the final two races, with racing stopping as the wind disappeared  after the earlier 10knot breeze.  Behind these two, who took the first two places in each race, Dave Williams and Neil Westbrook shared most of the final podium places with Alan Watkinson managing to take one in Race 4. This left John on top with his five wins to Peter’s three and Dave Williams in third.

Meanwhile, in the fleet of four DF65’s, the wins were shared around quite evenly with Andrew Peter and John Carlin taking three wins each and Derek Matthews the remaining two. This gave a tight podium with Andre on top with 9pts, John in second on 10pts and Derek third with 11pts.

The final results for this short series of seven events are contained on the Current Standings page here. Next week is the IOM Strebor Open, with two weeks off (one for the Club AGM on the 20th November) before starting the RG/DF65 Winter Series on 27th November.

A beautiful sunny day with the wind blowing from the SE with some serious shifts and gusts to keep you on your toes.
Peter Baldwin once again got the waders on and set a great course with quite some bias on both the start line and the leeward gate, the DF65’s started with the fleet but went to there own windward mark and if this is set correctly the leading RG’s and DF’s will finish together, as they did today.
We had 8 RG65’s that included 5 Pocket Rockets (Dave Creed) 1 Uno (Ceccarelli), 1 Argon (Graham Bantock) and an Electronica (Brad Gibson) plus 2 DF65’s, a mixture of rigs were used for the first few races with some in a lower aspect ‘A’ rig and some in there full height rig, the 2 DF’s both choosing the A+ rig.
It was Graham Elliott reunited with his Electronica that showed the early pace, winning the first 5 races, John Brierley taking the 6th race. The DF’s sharing wins in the first 4 races but Mike then taking the final 2 races before we called a lunch break. After the break, all RG’s now had there tallest rigs on with the edge going out of the gusts and another 6 races sailed to wrap up the day.
It was great to see a rare appearance from Andrea Roberts sailing an RG for the first time and I am sure she will now be hooked after todays decent set of results even if she does now have to do the washing up for the week after losing a side bet with Martin. Many thanks to Bernie for once again starting and finishing us.
DF65’s
Mike De St Paer      35       10pts        10 wins
John Carlin               11         18pts         2 wins
after 12 races 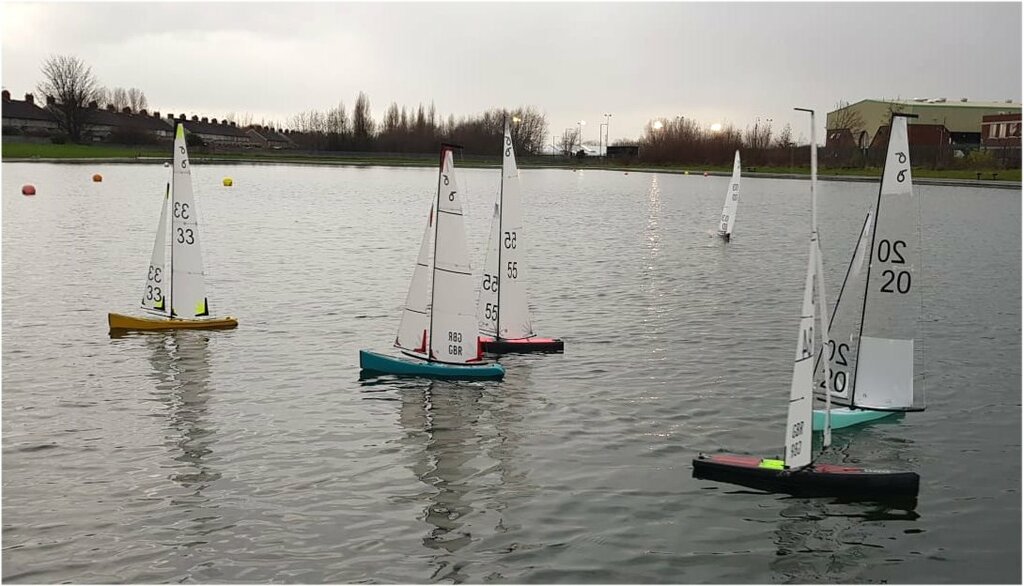 The first of the RG65/DF65 today at Birkenhead, unfortunately the wind was from the South which for anyone that wants to know is the houses wind, not ideal, and difficult to lay a course but Peter once again donned the waders and did his best. All the RG’s were in there top swing rigs except for Martin that had borrowed Johns Pocket Rocket for the event but John chose to supply Martin with a slightly lower aspect top suit that did disadvantage him on the day but he’s still a tough nut to crack. The DF’s all chose the A plus rig.
The DF’s and RG’s all start on the same gun but the DF’s had a slightly shortened course, this option of racing does seem to work when sailing a mixed fleet, giving plenty of practice on a loaded start line.
The wind started off with quite a few vicious gusts but as the day went on these gusts vanished and the wind swung around about 20 degrees making more of a reaching course unfortunately, still plenty of skill required though looking for those pockets of wind and shifts.
The racing proved to be very close on the day with only 16 points separating 3rd-8th in the RG fleet, Graham and John sharing all 8 wins between them took 1st and 2nd, unfortunately we lost Peter after race 5 with a split tyre on his car and this needed to be changed before his journey home. The DF fleet was dominated by Mike who took all 8 races, well done.
Well done also to Bernie who started and finished us, having to walk round to the top bank to accurately get our finishing scores kept his steps up.
The club has gone from strength to strength in these lockdown periods that have stopped us travelling further afield, lets keep this level of entries and quality up in 2021 and hopefully we will see the fruits of this when travelling is open again.

In the hope that racing at the club can re-start on Saturday 5th December, Graham Elliott has planned two Winter Series to take place between 5th December and 3rd April.  There will be separate series for IOM’s and RG65 plus DF65 boats (who will sail together on a similar course).  There are 8 events in each series and overall results will be based upon a boats best 5 races.  Please be aware that if the MYA is unable to confirm that Radio Sailing can restart by the 5th December, IOM Winter Series #1 will have to be cancelled.

Each of the events will start at 12:00 and racing will continue until the light fails or 15:45, whichever occurs first.  Booking will be via the Calendar or the home page links and limited at this stage to 13 boats, but increased if the MYA guidance allows it.  Please cancel any booking you make, should you be unable to make it, so that someone is able to take your place as we anticipate all places to be filled each week.