The second day of the Nationals was sailed in much lighter winds from the SSW ranging between 5 and 10 knots on average.  The control area was therefore shifted to the main promenade.  There was a delay to the start of racing due to an outstanding protest from Race 8A on Day 1 being heard before racing started.  However, after having a minimal break for lunch, 7 additional races were completed by the ultimate 17:30 cut-off time.  Prize-giving took place in the WKSC clubhouse with a welcome speech from the Club Commodore Jean-Louis Simons and a short thank you to the volunteers from Birkenhead Commodore John Brierley.

The final podium was:

The Classic M Trophy (first registration of a boat prior to 2009) was won by Andrea Roberts and the TOT’s Trophy (Team of Three) by Brad Gibson, James Edwards and Mike Parkington. 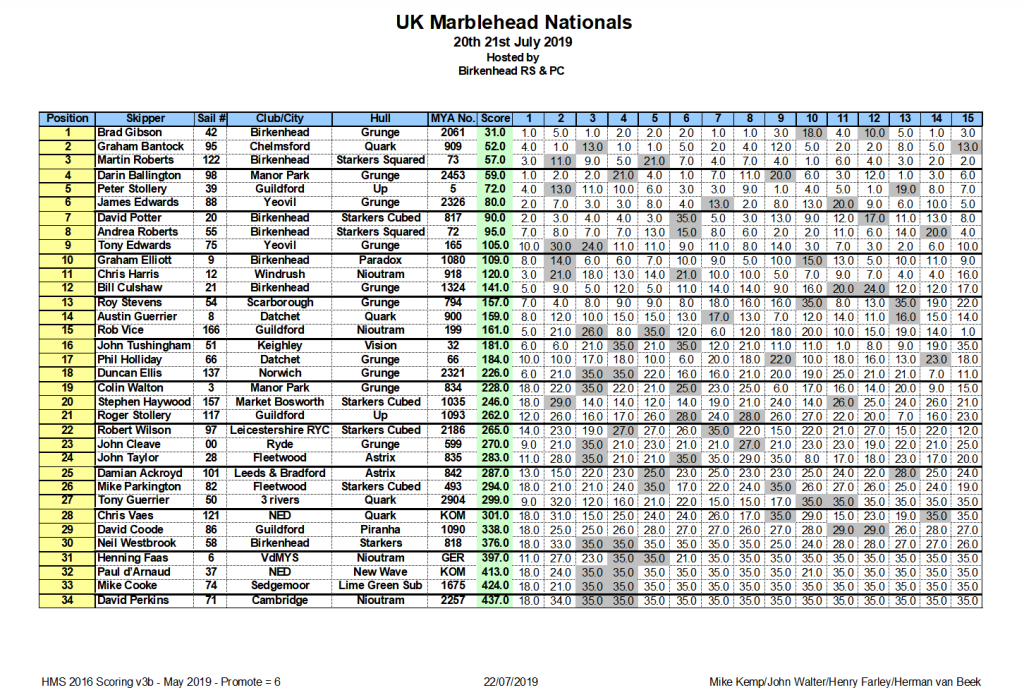 There are photos in the Gallery from Day 2 courtesy of Mike Parkington and a set of 65 from Andrew Peter.

Check out the HD Drone footage of 4 different A heat races taken by Henning Faas on the MYA Youtube Marblehead Racing Playlist. 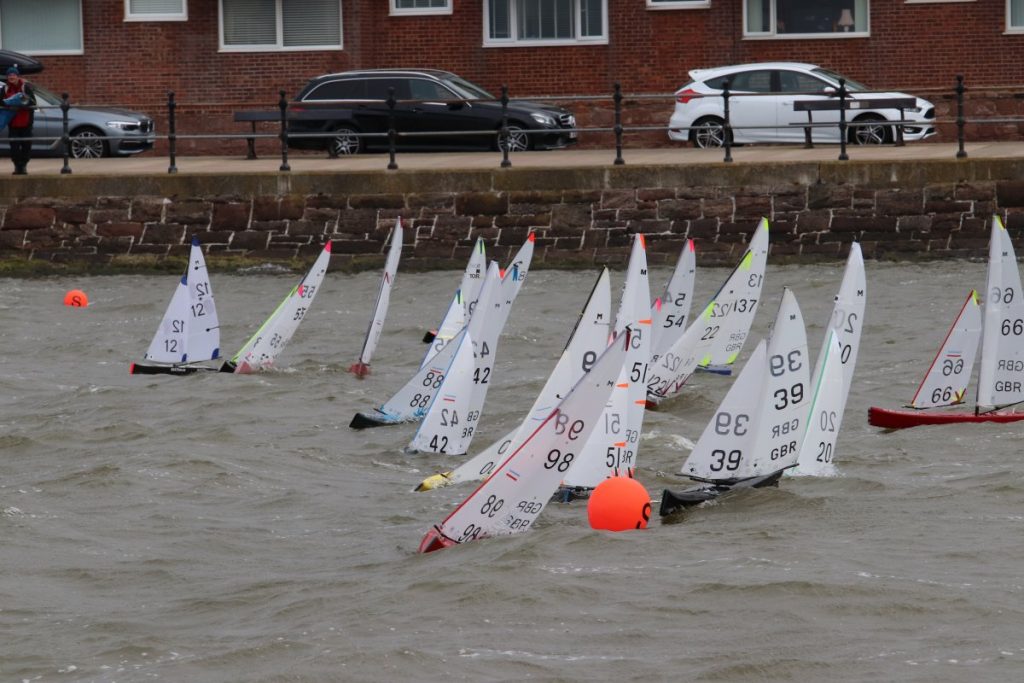 Eight Races were completed in 2 heats, with 14 to 20 knots of breeze from the West veering round to WNW.

The were a good number of breakages and failing gear leading to a reduced size B fleet.  Some boats had to stay on shore due to not having C2 and C3 rigs for their boats.

Winds are forecast to be lighter for tomorrow at 11 to 14 knots.

Here are the provisional results to the end of the day, subject to a protest which is due to be heard before racing on Day 2. 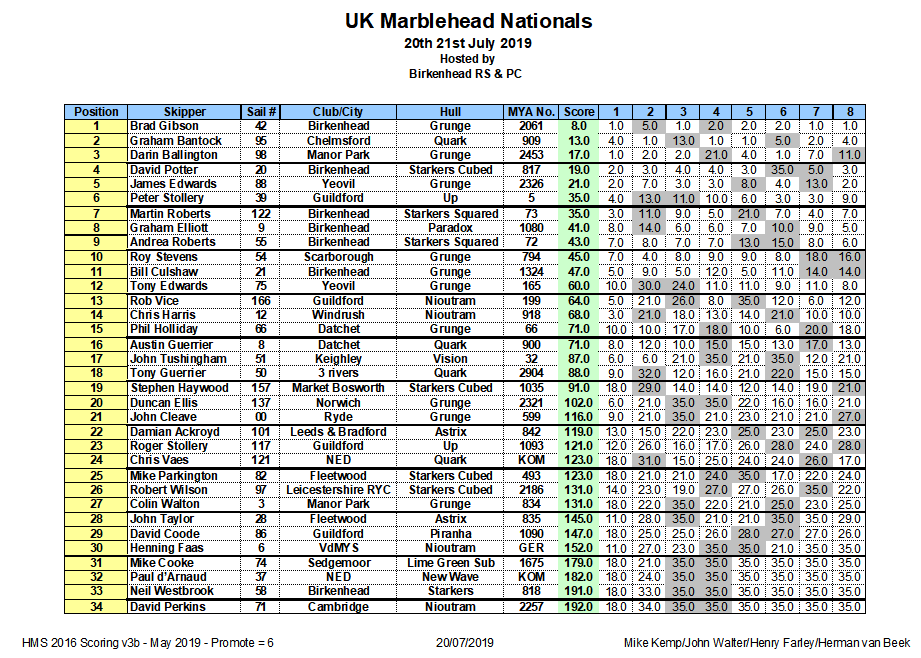 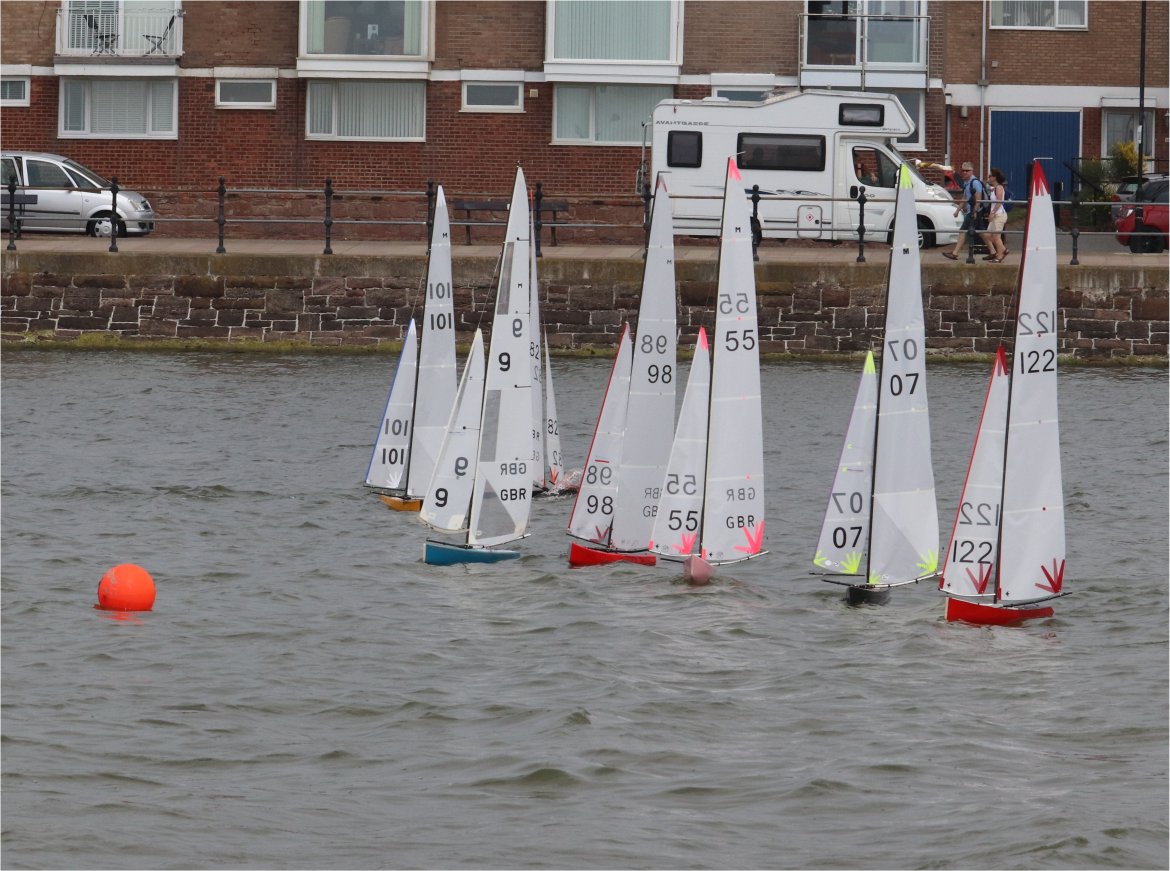 What a difference a few hours make at West Kirby, 10 skippers gathered at 12.30, not a breath of wind, by 1pm a nice top suit and by 3pm an even nicer ‘C’ rig wind.
With PRO Peter Baldwin opting for quite a lengthy course with a nice bias on the start line and skippers not 100% sure which end they favoured it was good practice for both the race team and the skippers for the upcoming Nationals at West Kirby in July.
After the first 5 races in top suit, it was Darin Ballington who finally came to grips with the course and registered wins in races 3,4 and 5, closely followed by Andrea Roberts. The wind then quite suddenly gusted up to ‘C’ rig and a rig change rest was called, this sudden increase in wind is now common at West Kirby and one to look out for in 3 weeks time.
Race 6 was won by Bill Culshaw by half a leg, finally getting to grips with the lake and his boat. In the end though it was Darin who took the day with Andrea’s consistent sailing and finishing in the top 3 in every race gaining her second place. Our other lady skipper, Tracey Ballington sailing well in races 3 and 7 to gain 2, 4th places.
After sailing we retired to ‘The Farmers’ for a few pints and a meal and where informed that between Penelope, Emily and Millie they had managed to catch 204 crabs whilst we sailed, a new West Kirby record!
Many thanks to Peter, Bernie and Jack on lakeside and boatmen Dave and John. 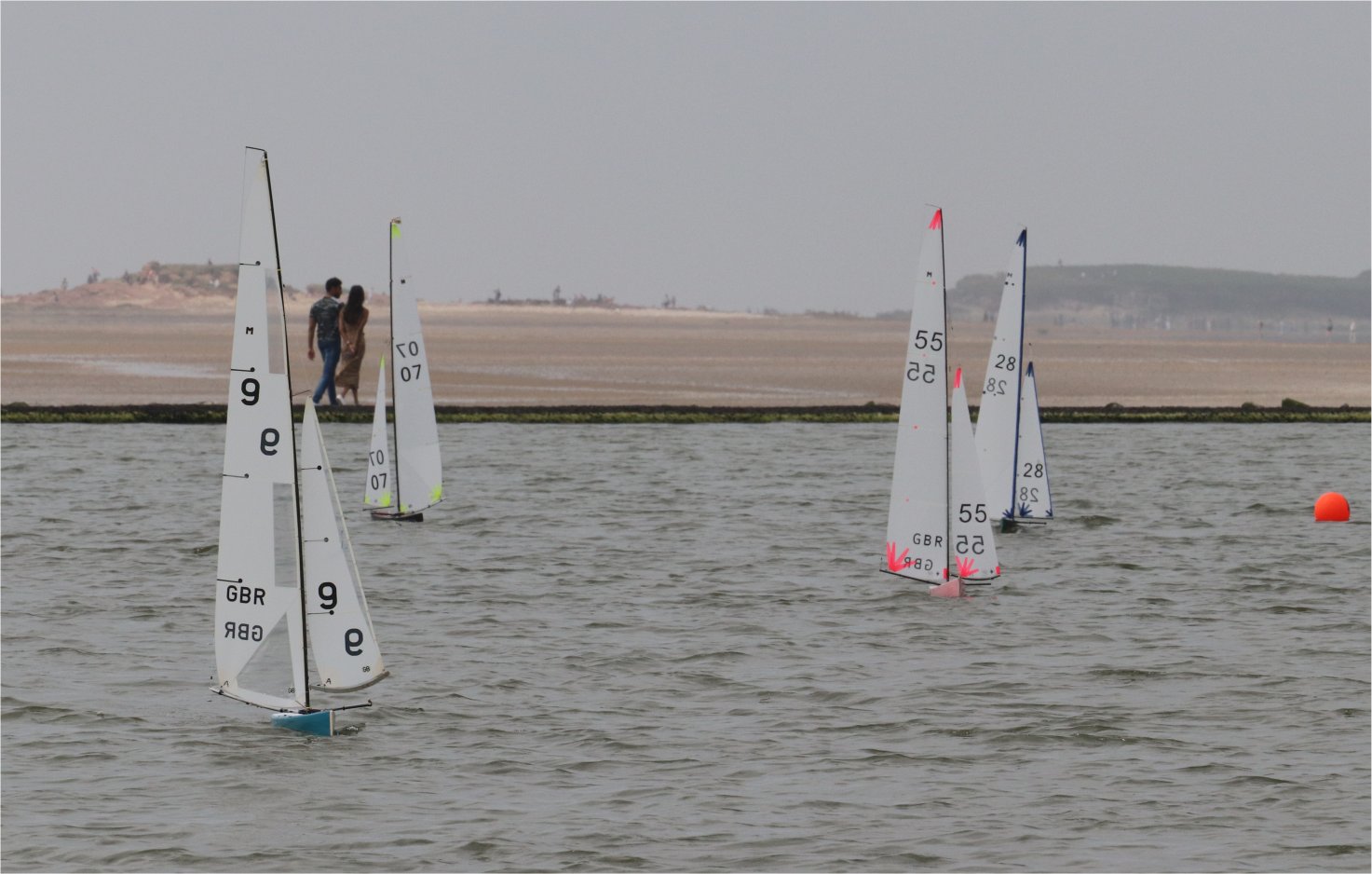 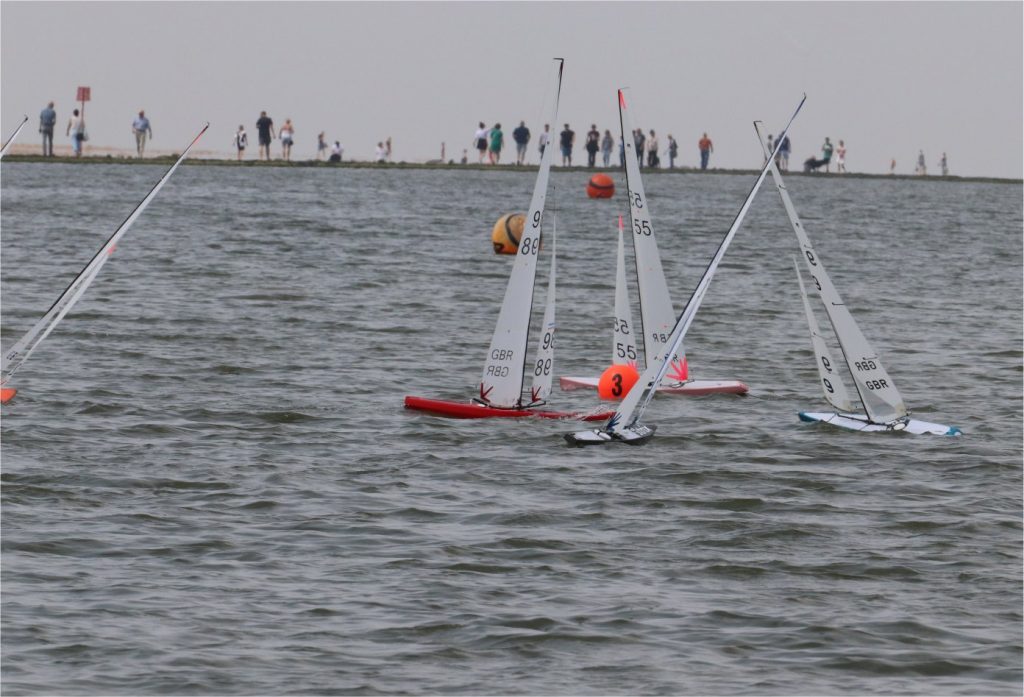 The second of two Marblehead Club Open Events at West Kirby will take place on Saturday 29th June.  Racing starts at 13:00 with a briefing 15 minutes before.  After sailing there will be a post race debrief and drink at the local “Farmers” pub.

Your last chance to get some practice in at West Kirby before the Nationals in July. Please let Graham Elliott know if you plan to attend. 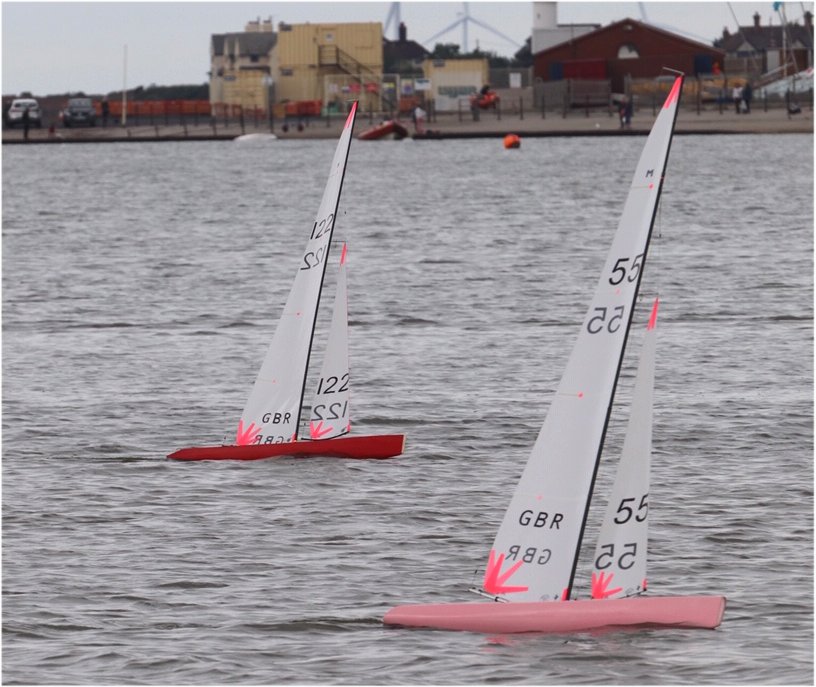 10 boats, 5 different designs, 5 knots of South/East wind, 18 degrees temperature, what’s there not to like about todays sailing at West Kirby.
Just a quick report as there is going to be a small football match going on in Madrid. There were 3 race winners in Darin Ballington, Graham Elliott and Andrea Roberts.
Darin ended being the deserved winner for the day but there were many good races by all skippers at some stage and all ended with a pint in the Farmers.
Thanks to Dave Williams and Zak Roberts in the rib, Jack and Bernie for starting and finishing the fleet and lets look forward to the next warm up race which takes place on the 29th of June as preparation  for the Marblehead Nationals in July.

More photos in the Gallery 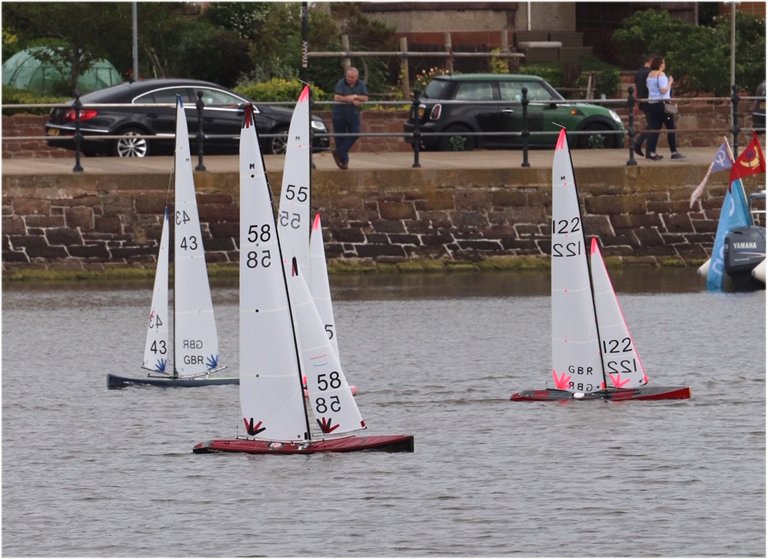 Prior to the Marblehead Nationals which take place on Saturday and Sunday 20th/21st July, Birkenhead will host two Open events at West Kirby Sailing Club on the 1st and 29th June, which are open to all Marblehead sailors who wish to participate.

On each Saturday racing will start at 13:00, with a short briefing 15 minutes prior to first start.  There will be no Race started after 4:30 and if no boat has finished an A heat by 5:00, the Race will be abandoned. After sailing there will be a post race debrief and drink at the local “Farmers” pub.

Entry for the day will be £7 (payable on the day) and the WKSC clubhouse and bar will be open.  Please advise Graham Elliott if you are planning to attend so that he can gauge likely numbers.  Entries accepted up to and including the day of the event.