An excellent days sailing for the 4th race in the RG/DF Summer series at Birkenhead today. Sunny and windy from the clubhouse end with big enough wind shifts to make the racing interesting.  Swing rigs and conventional rigs were both used in the gusty conditions. 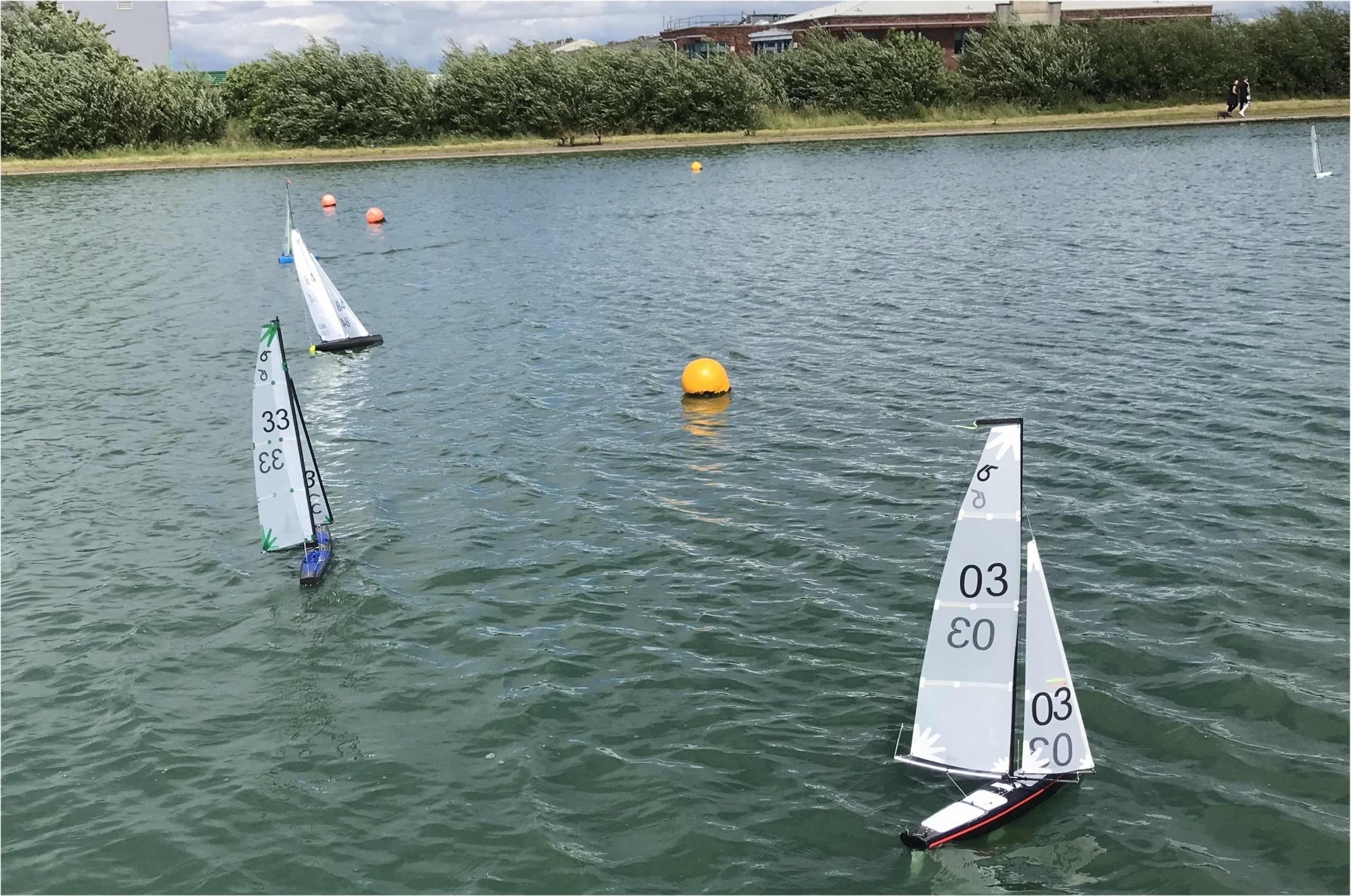 4 Uno’s competed in the RG65 class and 2 DF65’s joined in as well. Although John Brierley won 9 of the races, the finishing was extremely close in many races, with the result only decided on the last leg to the finishing line keeping our RO (and part-time photographer) John Carlin busy.  Dave Williams and Neil Westbrook were so close all afternoon, that they were tied on points and discards at the end with the tie only   broken in Dave’s favour with his win in race 8. 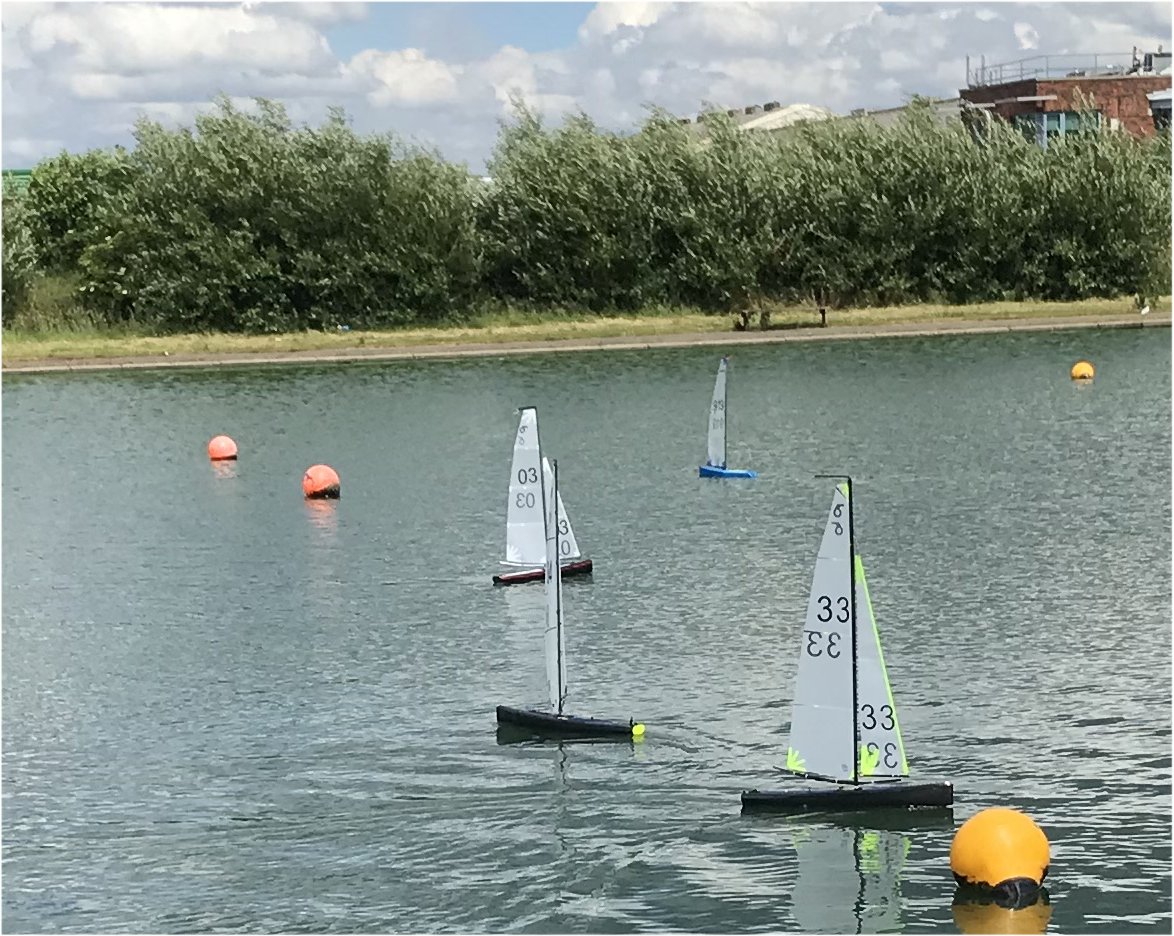 Another sunny summers day with another light and variable Westerly breeze, which yet again filled in as the morning progressed. We sailed from the far bank – due to fishermen unwilling to move their location. Thanks to John “the Boot” Carlin for being RO once again.

With the wind filling in towards the end of the session again, this raises the question – should we sail DF65 in the afternoon instead of a morning session? Comments from members welcome to Club Captain Andrew Peter or Secretary Charles Legg – contact details on the Contacts page under Information or click here.

With a 10 degree swing in temperature from Friday it was time to put a second layer of clothing on for the 6 competitors today. The wind was from the top end of the lake straight down the middle and middle of top suit.
Unfortunately John Brierley had been partying with his family the night before to celebrate his Birthday and when he turned up and plugged in the winch did not respond so he stayed and helped out instead of sailing.
Peter Baldwin, sailing his new BritPOP! for the first time was quick out of the blocks and scored a Turkey of wins, strangely enough he also did this in races 8-10 to take his total to 6 wins on the day. Placings swapped about quickly on the water due to some nice shifts and the whole fleet was very compact in nearly all 12 races. Other race winners were Martin Roberts with 3 wins sailing his newly developed Vanilla design and Graham Elliott sailing a chartered Vickers V9 with 3 wins.
The results reflect how close the racing was today with only 9 points separating the top 4 boats.

Many thanks to Dave Williams for starting, finishing and scoring and Jack for making the tea.

Nine Sailors arrived to sunshine and a light airs. John Carlin did the honours again as OD, and Neil Westbrook got the waders on to recover and set marks, for a full lake course, with a variable but mostly westerly breeze, which settled and filled as the morning progressed. Ten races with a two lap finish. Welcome to new member Martin Whittingham Jones.

John Brierley and Peter Baldwin travelled to Bournville RS & MBC on Saturday 11th June for the latest RG65 TT (Round 3).  The event was won by Chris Elliott sailing an Uno, with Peter and John tied 3 points behind, with Peter gaining 2nd on countback, with John rounding out the podium.

Full report and results sheet on the RG65 website here 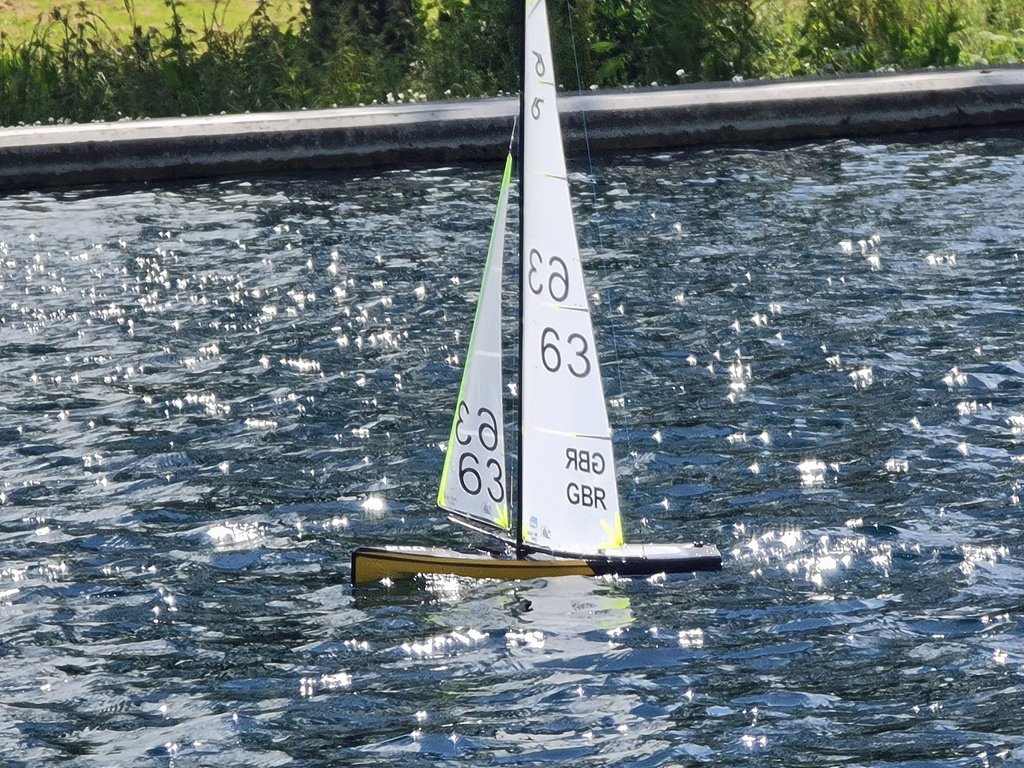 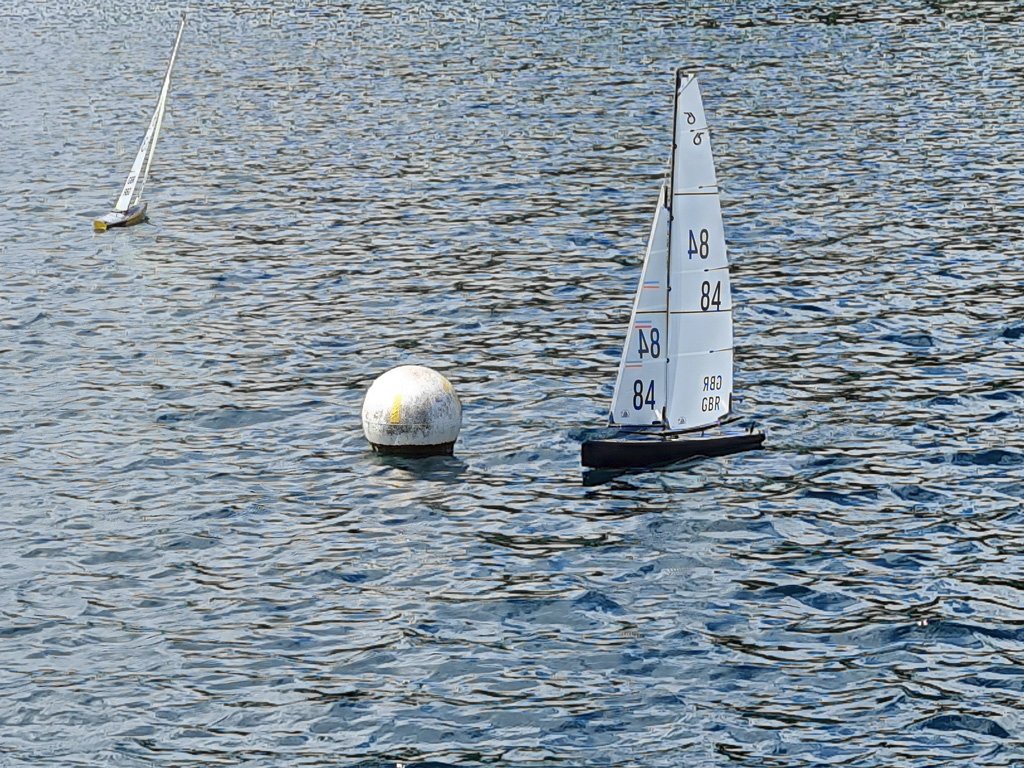 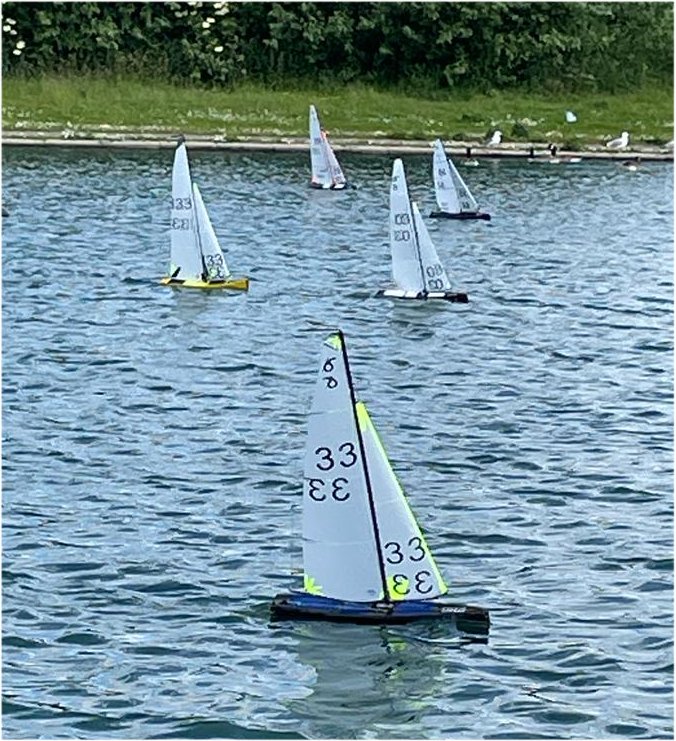 The Birkenhead club decided to run a ‘pop up’ RG65 Open Event with an 11am start on the Saturday of the Jubilee weekend and we managed to get 9 entries, 2 Pocket Rockets (Dave Creed), 6 Uno (Caccerelli/VAM) and 1 Argon (Sails etc/Bantock).
The wind was kinder to us than expected and came mainly down from Gautby Road with shifts and some quite heavy gusts that saw most of the fleet diving downwind at some point. Most opted for a slightly lower aspect rig but Martin, Bill and Graham all opted for there full height swing rigs. We also welcomed Bill Culshaw to the RG fleet this week with his borrowed Pocket Rocket from Peter. Lets hope he returns, but he did mention that he had completed 14000 steps during the day, although we don’t normally sail 18 races in an afternoon! 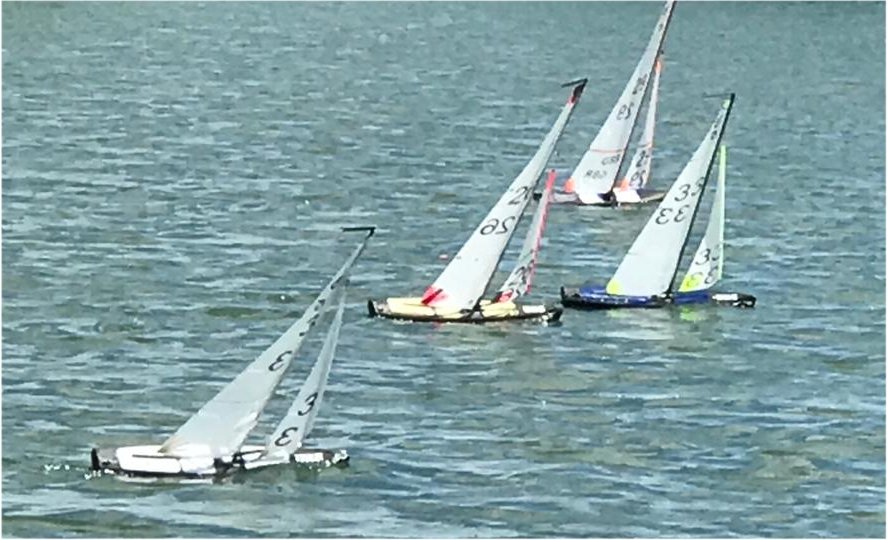 The racing was a lot closer than normal throughout the fleet and it was only in a few races that the leader broke away from the rest of the fleet to win by a large margin.
With the absence of Bernie, (we all send our best wishes to Bernie who had an op in the week), we decided that each skipper would drop out of 2 races to take up start and finishing duties and score these races with zero points after some discussion. 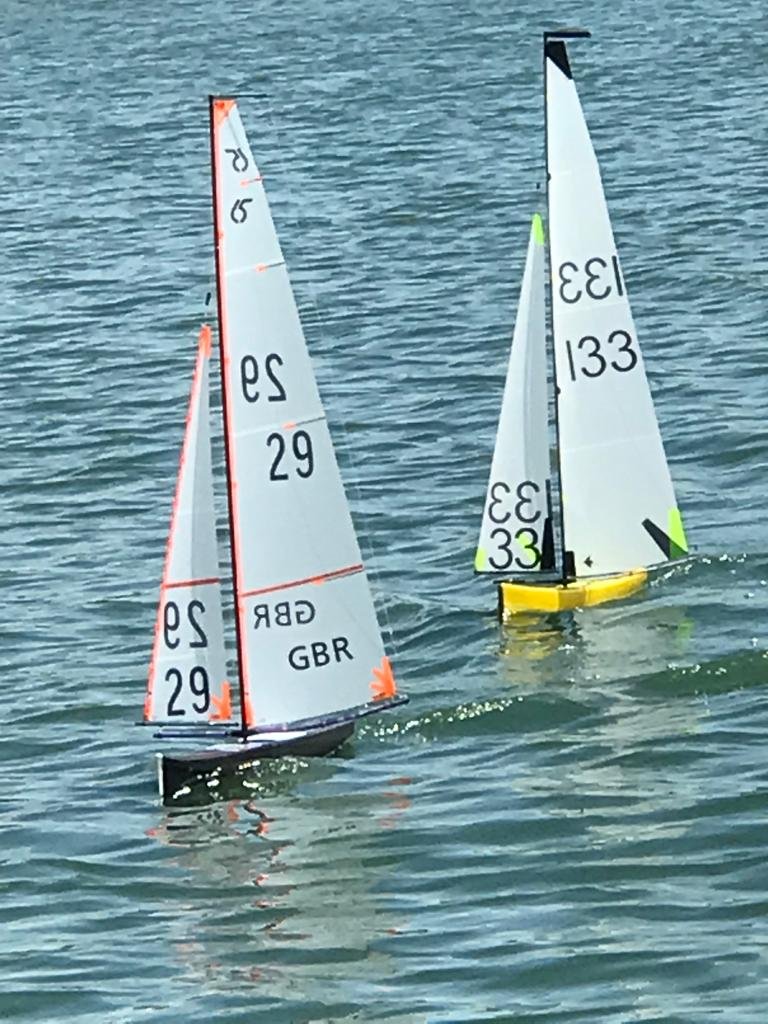 In the end it was Martin with a fantastic 9 wins that took top honours (and the winners bottle) with Graham in second place with just 2 wins and Peter completing the podium with 4 wins, John in 4th was the last race winner on the day with 3 wins, just 4 points separating the top three.
Pictures thanks to Bill Culshaw and Alan Watkinson.
This event was used as a tune-up for the next RG65 TT at Bournville on Saturday 11th June – Entry via the MYA website. 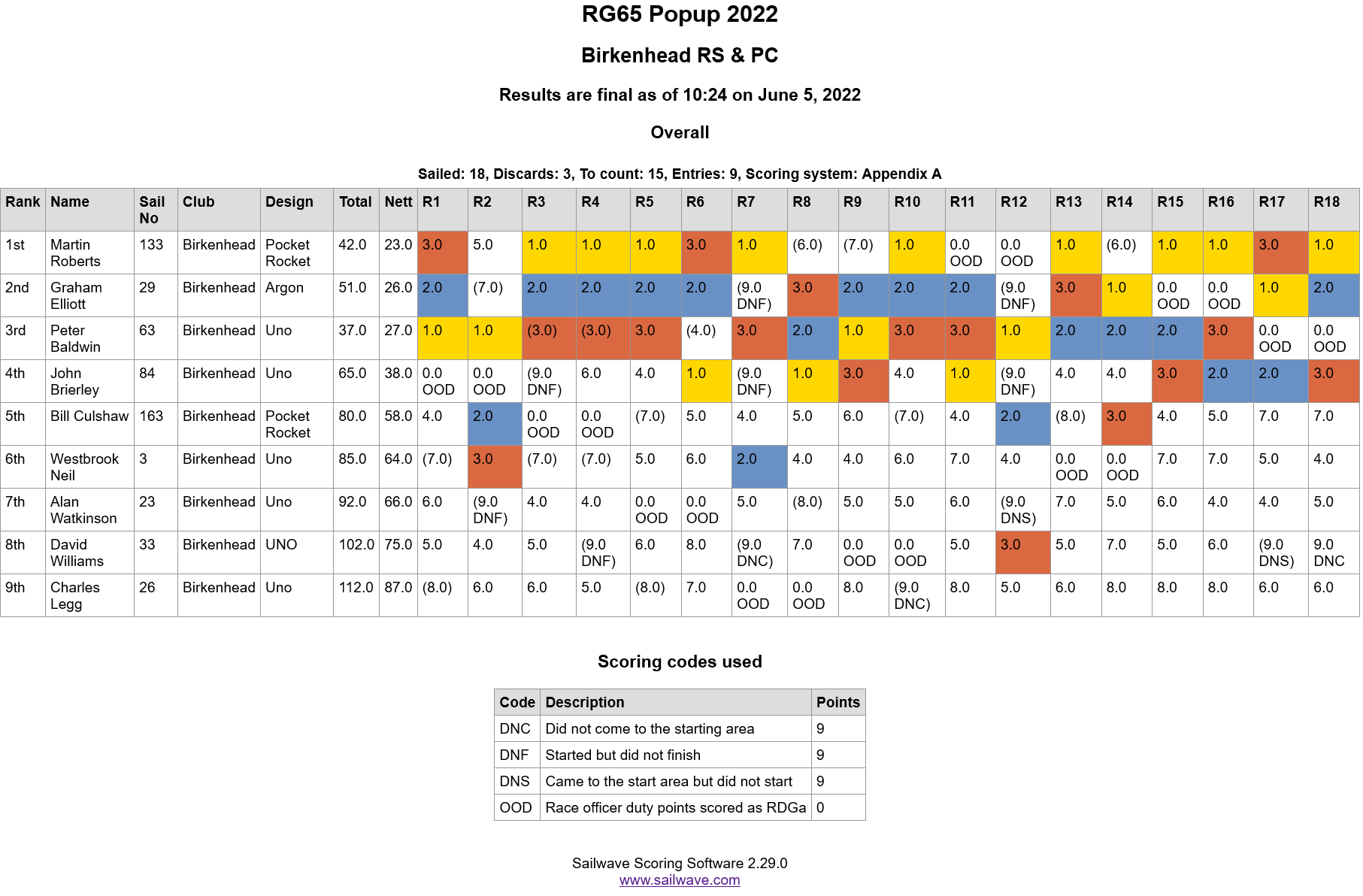