A very variable light breeze, shifting 180 degrees from West to South made setting a course very difficult. A+ rigs were chosen. Thanks go to Paul Little, acting as Race Officer today.

We managed 8 races using ¾ of the lake and a single lap course, apart from race 8, when the breeze filled in to a steady Force 2-3 Westerly, allowing a good two lap race to finish the day.

Finally, may we remind all sailors that pre-registration via the online website entry form is still required, to enable Track & Trace, manage numbers, and allocate RO Duties.

The NoR for these two events has now been published on the club website and entry is open.

A light A+ wind from over the houses greeted the twelve sailors today. Neil volunteered to don the waders and to move the start line so we could sail from the far side of the lake a finish mark was placed half way up by the bench which enabled Stan Metcalfe our RO for the day to observe the races. It was a struggle heading for the windward mark, sometimes close-hauled and then a reach and to add to this an underwater obstruction which if you were unlucky enough to hit, stopped the boat dead in the water. Overall seven different sailors managed at least one win with Mike taking the overall spot due to his consistency with nothing less than a fourth after discards. Many thanks again to Stan who kept the 10 races racing flowing.

There were 8 RG65’s (but no DF65’s) for the first in this Summer Series of races now that restrictions are easing and Saturday attendances typically less than the limit of 18 entries.  Unfortunately, the sailors were greeted to a light and fickle breeze that couldn’t make up its mind whether to blow from the East or West.

The first race was started near to the clubhouse, but ended up being a broad reach to start, although most points of sailing were covered during the race, with John Brierley taking the first win of the day.  The fleet then moved ends to start in the opposite direction for race 2, which was taken by Dave Williams in his new Uno on its second outing.  Races 3 and 4 went to Graham Elliott sailing the Electronics after servo issues in the Argon meant a retirement in Race 2.  By now (and after an early refreshment break) the wind had picked up to a 5 or 6 knot WNW breeze with some good shifts and variations in pressure around the course.  Martin Roberts took his only win in Race 5 and then John had his second in Race 6.  The afternoon ended with Graham mopping up the last three races and the afternoon.  Martin’s consistency gave him second, just one point ahead of John in third.

Thanks as usual go to Bernie for running the racing and scoring for us.

A good sunny day with the wind from the Clubhouse end, A+ was the chosen rig of the day. With Neil volunteering to don the waders, one of the start line marks was moved to make a non biased start. Several boats were keen to get going but fell foul of the start line judge. A few boats had electrical problems and had to retire and then with the wind strength increasing the last few races saw several more retire. 10 races were held with David Potter and Mike de St Paer taking 9 race wins between them, with David just coming out the winner. John Carlin took third place with a good consistent sail. Many thanks to the RO for this week, Dave Williams. 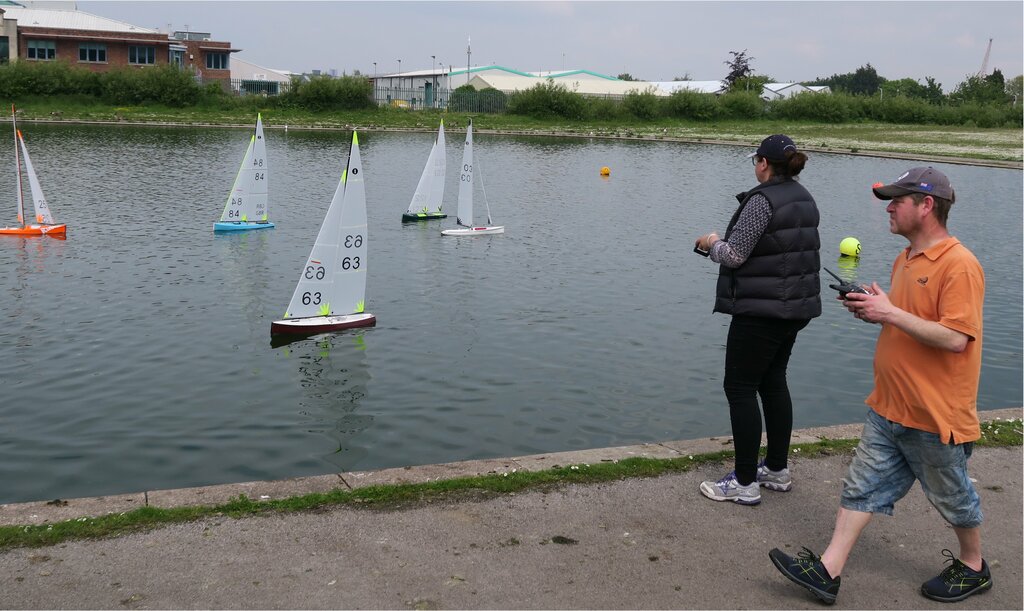