Sunday dawned as cloudy and mild but without the early rain that had been forecast for the early part of the day.  The wind once again was from the SE, but a little stronger than Saturday at 10-11 knots. Racing got underway soon after 9:30 and a total of 6 races were sailed by 11:30 when the breeze again started a shift towards the SW and racing had to be stopped until the wind settled and the course could be reset to sail from the Promenade.  A further 9 races were then sailed before the cut-off time. At least the sun was now out to warm the competitors and although the wind had initially reduced in strength as it shifted, by the time racing resumed there were some stronger gusts.  Some competitors held onto their top rigs as long as they could but eventually had to change down. 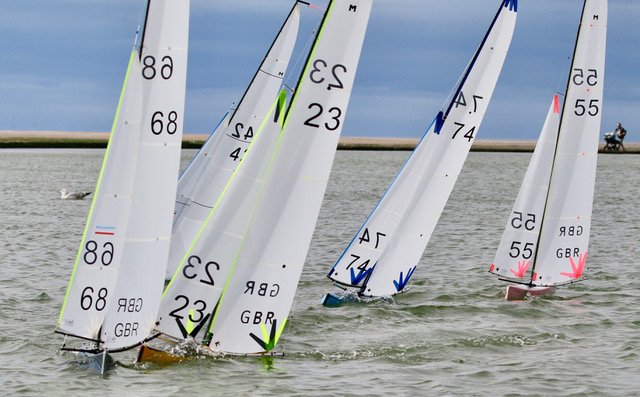 Once again, Brad Gibson dominated the day with a scoreline almost a third of the second placed boat, Austin Guerrier, with Rob Vice a short way behind in third place. Most of the wins were taken by those on the podium, although Darin Ballington took two race wins and Martin Roberts one. Darin unfortunately had electrical problems in Race 9 which forced an early end to his day.  Martin had a long hook up on a mark warp when in a good position and then lost another race due to gear failure which also ended his chances of a higher position.  At the prizegiving, Brad thanked everyone for coming to the event and also thanked all those club members who helped run the event over the weekend.

A great but ultimately tiring days sailing with a good breeze, sunshine and no rain made for a good weekend at West Kirby.

Sunday photos courtesy of Gill Pearson. A full set of photos taken is on our Flikr page here.  If you would like a full resolution version please email the Webmaster (see Contact page) 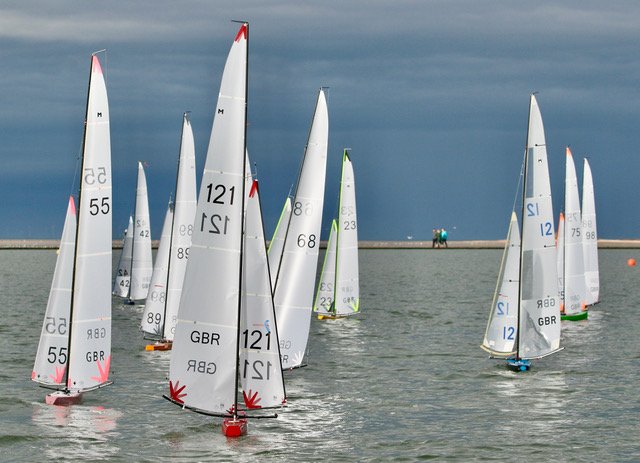 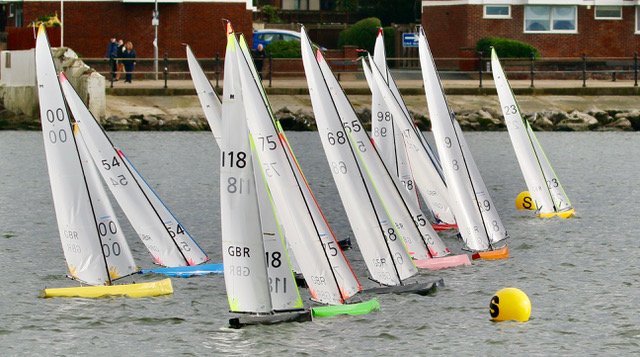 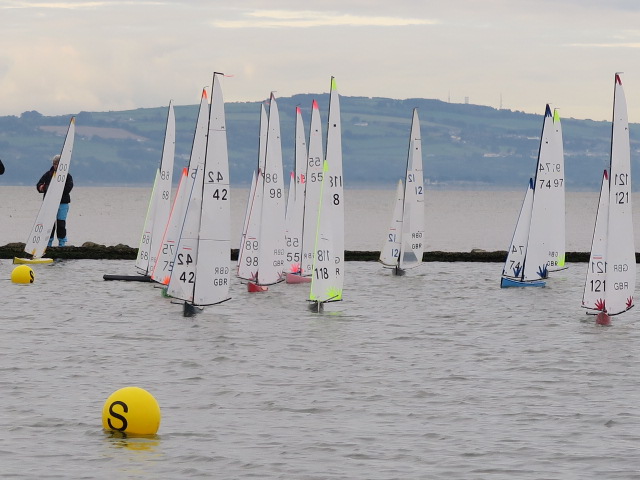 The day started with a light 6 or 7 knot breeze from the SE, giving a reasonable course sailed from the outer walkway of the Marine lake.  During the morning, the wind swung more to the South before going back again.  It never increased beyond 7 knots but did drop to 2 knots before rising again.  Finally after lunch the wind died and then returned from the SSW.  Racing was held for an hour or so whilst the course was reset and the control area run from the promenade.  This enabled an additional 6 races to be completed for a total of 14.  The top spot was never much in doubt all day with Brad Gibson getting the lions share of the race wins.  Behind him though there was close racing within the chasing group of Austin Guerrier, Darin Ballington, Rob Vice, Mark Robinson and Tony Edwards, all vying for the podium positions at different times in the day.  In the end, Tony Edwards had a good final run to finish in second, with Mark Robinson in third. 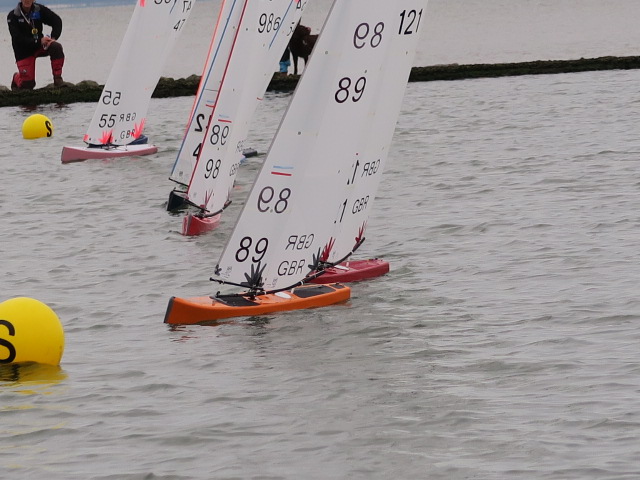 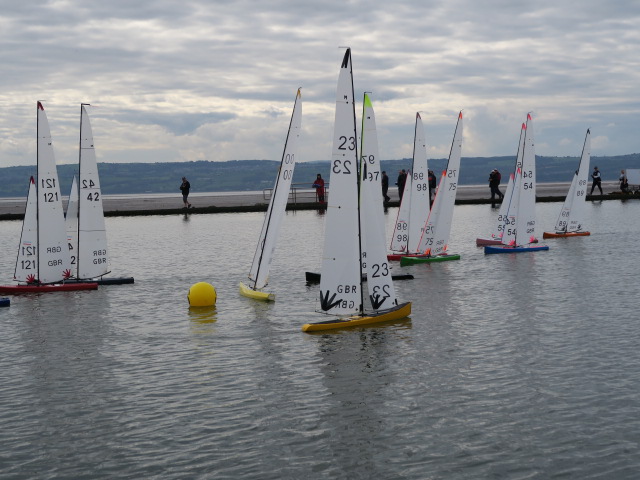 Click on the image to see at full resolution.

Saturday photos courtesy of Dave Williams.  A full set of the images taken is in an Album on our Flikr pages here 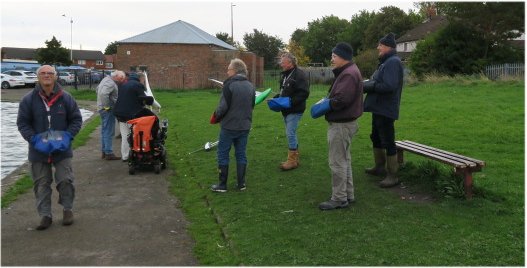 Ten Sailors arrived to a cold A+ wind blowing straight down the lake.  John Carlin was on good form winning 5 of the races. There were a number of very close finishes, keeping our OD of the day Dave Williams on his toes. Ten races were held. 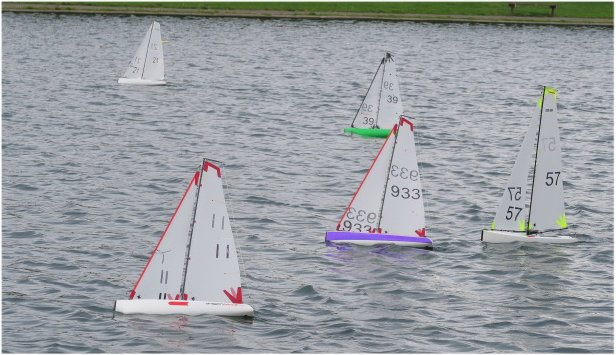 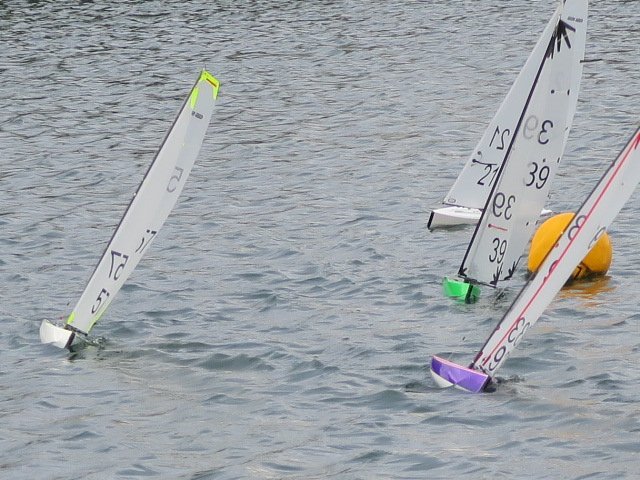 A light SE/S/E breeze confronted the 6 RG65 skippers for #6 in the Summer Series.  After 3 races in a light and dropping wind, the breeze switched off completely with no indication of when it would return.  A break was called and some work was started in preparation for next weeks M Ranking weekend at West Kirby.  The rain then started, which put paid to any chance of the wind returning and so racing was cancelled by 15:30 with only 3 races completed.  John Brierley took two wins to the single one for Peter Baldwin and so John finished first, Peter second and Neil Westbrook third.  Thanks again to Bernie for running the racing.

A very good turn out today both with sailors and a good A+ wind straight down the lake with the sun also in attendance. The score sheet does not do justice to three of the sailors who had to leave early in John B, Sally and Paul H.  We also had Richard W turning up after the start time to manage only 4 races.

Credit must go to Mike, who this week showed a more consistent score card and came out on top. There were a lot of very close finishes keeping Malcolm Harvey our OD on his toes and we thank him for his services today.

After a short break of three weeks with insufficient sailors to organise any racing due to several National Championships taking place with good club representation (RG65 and DF95), the IOM Summer Series continued this week albeit with only three on the start line. A solid A rig wind from the clubhouse end welcomed the IOM skippers. 10 races were completed before the weather was due to turn. We spent some time on mast rake settings, starting techniques, and a whole load of race tactics. A big thank you to Bernie for running the races.