The fleet of 8 IOM’s were again treated to a breeze mostly down the lake with occasional gusts from the North side over the factory units.  Everyone opted for No 2 rigs as the breeze was mostly up at that level with occasional lulls into No 1 territory.  John Berry surprised himself  in Race 1 by getting to the windward mark first and led the fleet through to the finish.  Tre Joinville also had a great first race by finishing second in a borrowed Lintel MMX, whilst Martin Roberts prepared his loan Widget for the day.  Martin then swapped boats with Tre and proceeded to record four wins in succession, before Peter Baldwin took the final race win before a short break was taken.  A good number of other sailors had their turn at the front with second places going to Neil Westbrook, John Berry and Lawrence Drennan in this first session.  In the final four races, Martin took two further wins, Peter one and Tre the final race after a three way battle from the leeward gate against Peter and Martin.  Derek struggled with the settings on his borrowed Widget at the start of the day, but after some hasty adjustments in the break by Martin, managed to record a couple of good results in the final two races.

Martin comfortably won the afternoon, with Peter second and Lawrence putting in a consistent set of results for third.  A great afternoons sailing again and thanks to Bernie and Jack for running the racing once again. First photo from John Berry (resting after his win?) and last photo from Paul Hounslow. 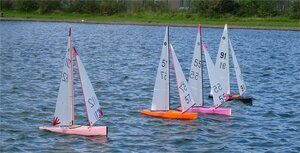