After the overnight showers had cleared, a good breeze towards the top end of A Rig from the far end greeted the 5 sailors for this weeks IOM racing, along with some sunny periods for good measure.

John Brierley (Britpop!) won the first three races in quick succession and after the first start was abandoned with first Bill then Peter caught up together in fishing line.  They had to be extracted by our RO Dave Williams who then spent a while untangling the many metres of line strung between and around the mark warps. 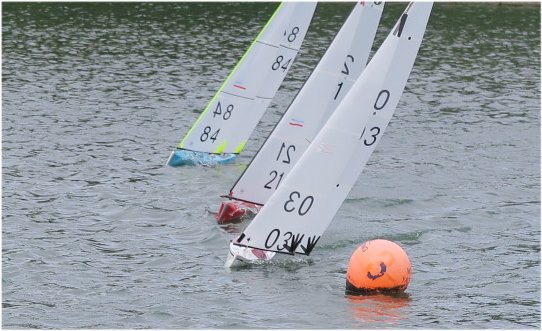 Peter Baldwin (Britpop!) then took races 4 & 6 and Bill Culshaw (Britpop!) took his first win in race 5, before a tea break.  There was close racing all afternoon but especially after the break with both Neil Westbrook (Widget) and the Kantun 2 of Charles Legg (after a few changes to rig settings),  being well in the mix or even ahead at the first mark.  Unfortunately, they were unable to hold onto any advantage and the wins were again shared between Bill, John and Peter.  A great afternoons sailing with a good pace set by the RO so that we completed 12 races in good time even after a slow start.  John took the overall win with Peter 2nd just a single point behind and Bill a further 4 points back in third.

Many thanks to our photographer,  RO and course setter Dave Williams and Jack for making a brew all afternoon.