A total of 11 sailors turned out for the third in this series of individual IOM club race days for an afternoon of racing in a good but cool top suit breeze straight down the lake (WNW) and plenty of sunshine.  Racing got underway soon after 1pm following some minor course tweaks by the Commodore after last weeks RG65 racing.  With plenty of shifts to either make good gains or catch you out, the racing was close with place changes throughout the fleet in most races. 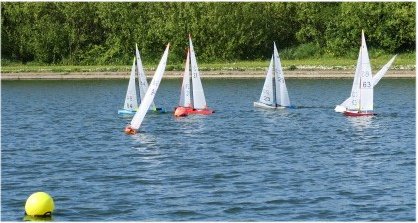 Martin Roberts set the pace by winning race 1, followed by Bill Culshaw taking race 2 by a big margin having picked up a great shift on the RHS of the course soon after the start whilst most of the fleet was tacking up the near bank.  He followed this up with wins in races 3 and 5 with John Brierley gaining his first win in race 4.  Martin then won the race 6 before a short break was taken, with the overall result al to play for in the next 6 races. 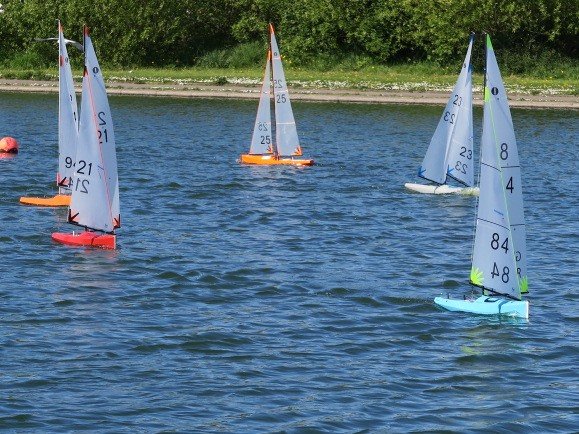 The “re-fuelling” break helped Peter Baldwin gain his first win in race 7, before Martin picked up his third win in race 8.  John took race 9 and Dave Burke race 10 having been second in a number of previous races. John then gained his third win in race 11 and Peter rounded out the afternoon with the final win.  So the wins were spread over 5 different helms and the final points were very close, with only one point separating Martin in first and John second and then two points between Peter in third and Bill, fourth.  Thanks once again to Bernie and Jack for running the afternoon. Photos courtesy of Dave Williams.

If anyone in the club (or prospective members) would like to try sailing an IOM, then Andrew Peter has a couple of race ready IOM’s to loan out.  Please make contact with him at the club or through the contact pages if you wish to give it a try.  There may be other loan boats available in the club if both of those are used up in the future. We would love more sailors to experience the buzz of close competitive racing available at the club in this fleet. 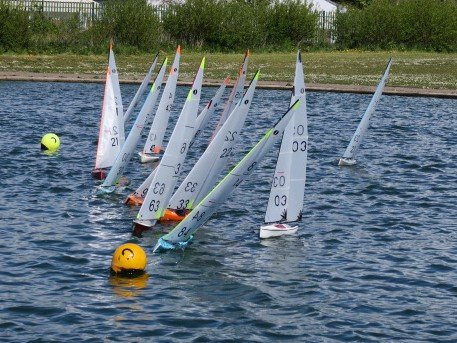