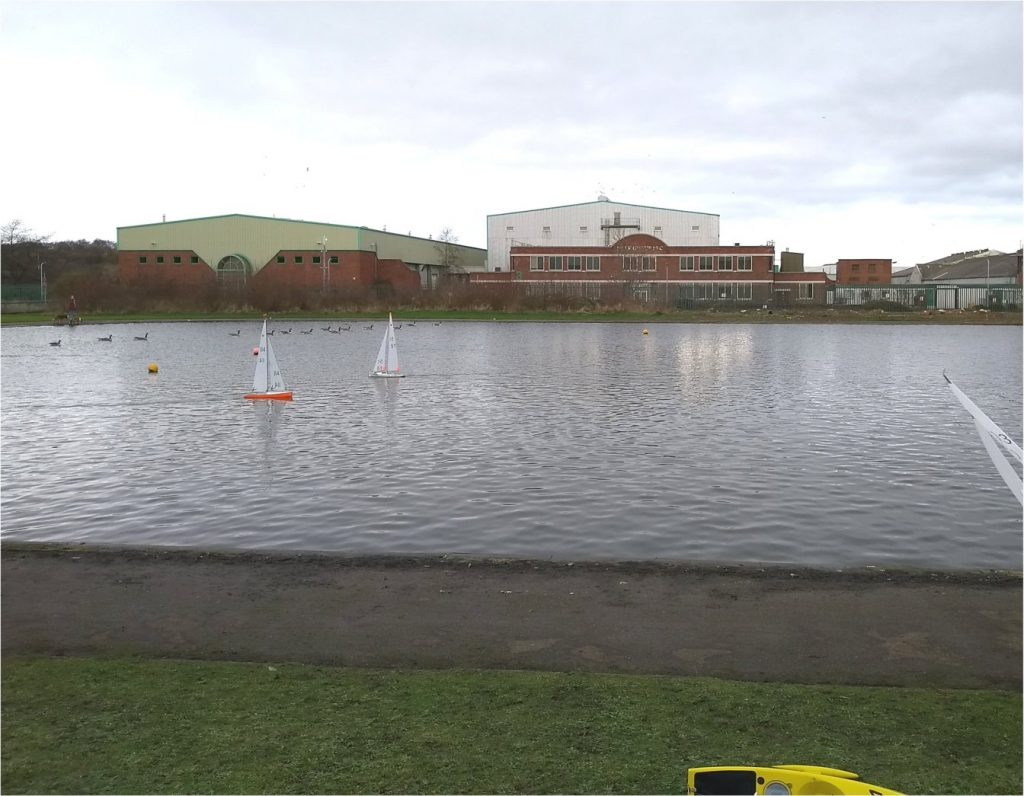 There was an excellent turnout of 18 boats at this the third of the Winter IOM series at Birkenhead.  Everyone was treated to a new view as they looked across the lake from the southern shoreline as shown in the photo above.  The trees all along the Northern edge have been cut down over the last week and the factory units are clearly visible again.  This brought back memories of the lakeside and the surrounding areas from years ago for some long standing members!

With a breeze from the South as we started, a course was set with two beats across the lake and a long reach back to one end of the start line.  Although there was a good 6 to 8 knot breeze blowing whilst the course was being setup, this seemed to disappear during the early races with boats getting stuck in significant holes whilst boats behind caught up with them on a light breeze from a different direction.  By the lunch break, the wind seemed to have moved to a more westerly direction and so marks were moved around so that races could be run in the opposite direction.

Racing was mostly very tight between the top four or five boats with places often only decided in the last few meters to the finish line.  Occasionally, a boat would get a good breeze off the start line and have a commanding lead by the first mark and then keep or even extend this lead by the finish.  By the end of the day, conditions had become very difficult at times with significant gusts causing boats to lose control if you were in the wrong place on the course when the gust hit. Everyone seemed happy to finish at race 10 with the conditions as they were.

Graham Elliott made the best of the conditions with his Britpop, taking the day by winning seven out of the ten races.  Brad Gibson sailing his Red Wine was second with a consistent set of results including one first, that very rarely saw him out of second place.  John Brierley in a Britpop rounded out the podium in third place and another win, with Peter Baldwin taking the other win in his Lintel MMX.

Thanks once again must go to Bernie and Jack for running the racing and Joyce for providing a hot cuppa at break time.

Ten races sailed.  The next event in the IOM Winter series is on Saturday 25th January.