A great wind straight down the lake and not the forecast “houses” wind welcomed the 5 skippers to our clubs latest social IOM race. All rigged up with top suits but Graham decided to make a change to his ‘B’ rig after a quick pre-race practice before the first race which proved to be the correct choice with a convincing win in race 1, a quick rig change break was called after this race to allow all skippers to change down to ‘B’ rig.
The wind stayed with us until race 4 then started to gradually die away giving the Italico an advantage in these under-pressed ‘B’ rig conditions over the fleet, 2 more races were sailed until we called a break that saw everyone changing back to the ‘A’ rigs for the remainder of the afternoon that also saw the wind swing around 30 degrees giving some very interesting shifts and gusts to deal with.
The last 4 races also saw the sacking of Martin with Andrea taking the helm of her pink boat which she had not sailed for some considerable time. With a new trim on the boat, she proved to be a force to be reckoned with, winning 3 of her 4 starts.
It was great to see Derek sailing an IOM for the first time and he proved to be a welcome and very able addition to the fleet, also visitor John sailing well in many races but getting unlucky with the Birkenhead shifts, Charles also had many good races.
Many thanks must go to Bernie and Jack for starting and finishing for the completed 12 races.

Next week will be another RG65/DF65 social race afternoon starting at 13:00.  Please enter via the links provided.

A solid NW top suit breeze was the order of the day for the 7 boat fleet. Great to see Mike and Sue back , along with Derek making his debut in the IOM fleet, with a borrowed boat from Andrew.
The story of the afternoon was how you got off the start line. Sudden wind shifts made would define how good a result you would get. At race 5 a tactical chat with the fleet would mean the fleet would get more consistent starts. So an afternoon of good and average sailing, shifts and nose diving, Thanks to Jack and Bernie . Back for more IOM racing next Saturday starting at 13:00.  Please enter via the links to the right or via the Racing Calendar page. 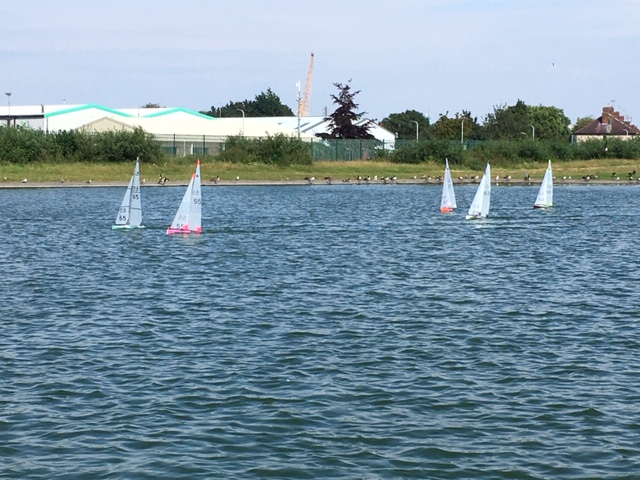 An interesting 7-10mph wind blowing down Gautby Road greeted the 8 skippers on this sunny Saturday afternoon.

It was John Brierley that started well with 4 second places and a win in the first 5 races, but unfortunately he then had to retire from the day with radio problems. Bill then showed some great pace and finally started to react to the wind shifts to take wins in races 4 and 7. Lawrence also showing some great form with a brace of seconds in races 6 and 8. Charles after a difficult start and some repairs at the start of the afternoon improved greatly in the final 5 races even if the results do not show this improvement, it was there.
It was Martin that took top honours with a strong finish winning 3 of the final 4 races finally showing his skills within this class under these conditions.
5 different race winners from the 11 races sailed with some extremely close 3 boat finishes to keep Jack on his toes all afternoon.
Many thanks to Peter for setting the buoys and Martin for trimming them after race 3 when the wind swung round a few degrees also thanks to Jack and Bernie for starting and finishing.

The next two weeks are joint RG65 and DF65 with an 11am start time. If you are planning on sailing please pre-register for all races with Graham Elliott to avoid disappointment on the day. 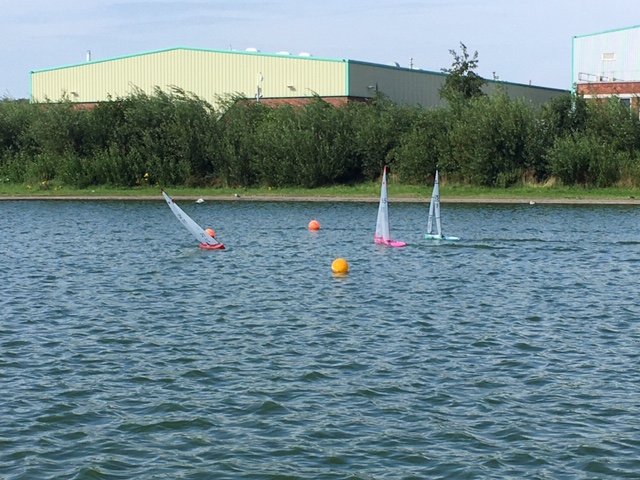 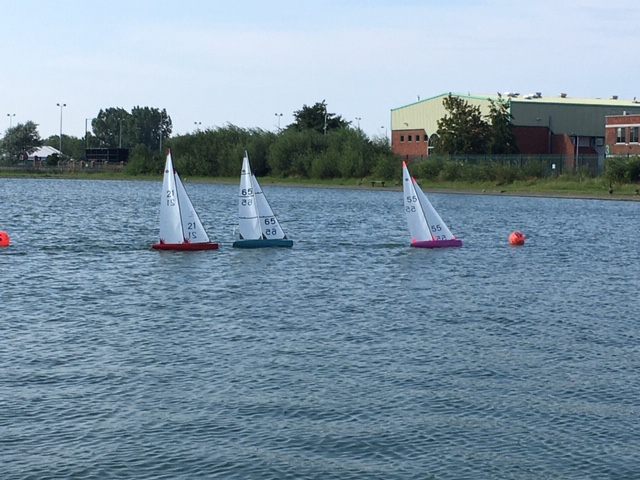 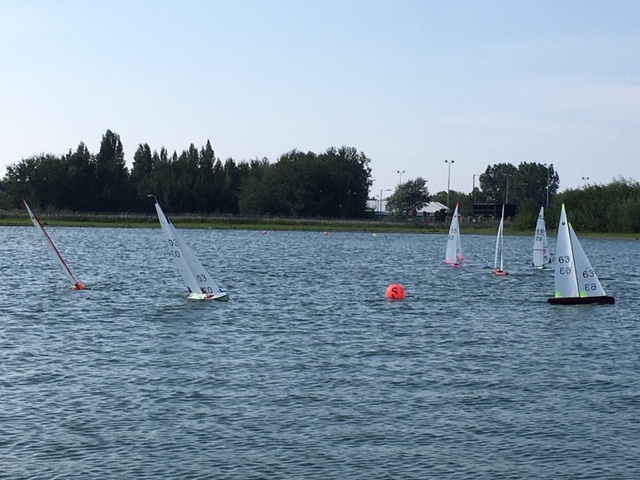 After a week with winds from most points of the compass, it was good to see a return to a decent 5 to 8 knot WNW breeze down the lake again and sunshine for the first couple of hours to give some “champagne sailing”.

Racing got underway soon after 1:30, catching out some sailors who hadn’t spotted the change of start time.  John Brierley started well to pick up the first race win, with Bill Culshaw taking the win in Race 2.  John then took three of the next four races, with only Martin Roberts spoiling his run in Race 4, before he had to retire in Race 6 with gear failure when his winch support bracket failed, ending his day.

After a short break, Bill picked up another couple of wins and was more consistent than John, who had two further wins, but got on the wrong side of some Birkenhead shifts and had to use a couple of his results as discards.  Graham Birkett and Peter Baldwin also had a win each in the second session, with some very close finishes for the top three boats in many races.

In the end, the final result after 12 races may have come down to some bad luck for Bill as he picked up a carrier bag in Race 10 and had to retire whilst vying for the lead in that race, which John went on to win.  A great afternoons racing thanks to Bernie and Jack for running things for us again.

Next week (15/8/20) will be another IOM afternoon starting at 1:30. Please let Graham Elliott know if you would like to join in the fun. 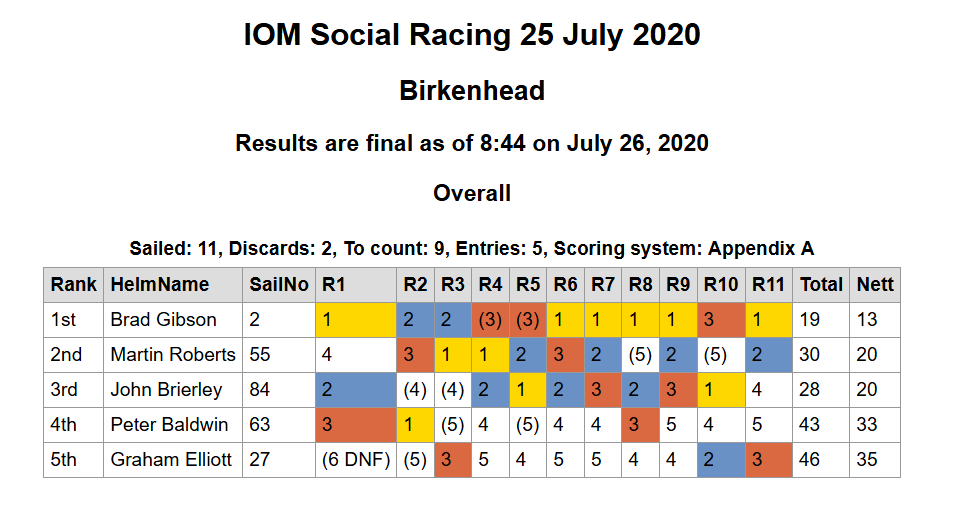