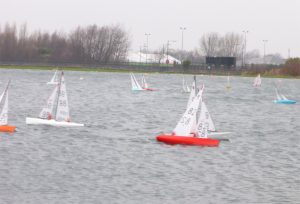 The forecast of icy rain and gale force winds didn’t deter 19 hardy skippers racing for the 2018 Christmas IOM Race. The punchy south easterly breeze enabled Bernie and Jack to set a windward leeward course which used the full length of the lake. Remarkably there were very few retirements, a testament to boat design and maintenance. At the briefing Graham Elliott reminded skippers to race fairly and given the conditions try to keep incidents to a minimum. The leeward gate helped keep racing running smoothly, with the near buoy safer but less advantaged and the far buoy advantaged if you could complete the risky tack on the bank in the big waves! Before lunch racing was fast and furious, with many people posting good and average results. After a warming up with a brew and a mince pie, Bernie promised just 5 more races. With the rain and the wind building and the light dropping this was welcomed news. After 12 races Paul pipped Derek in 1st place with John Brierley sailing very consistently to claim 3rd. The next IOM Winter Series race is on Saturday 22nd December, 1pm start. Fingers crossed the suns out!

Thank to Peter Baldwin for risking his camera to take a pic!