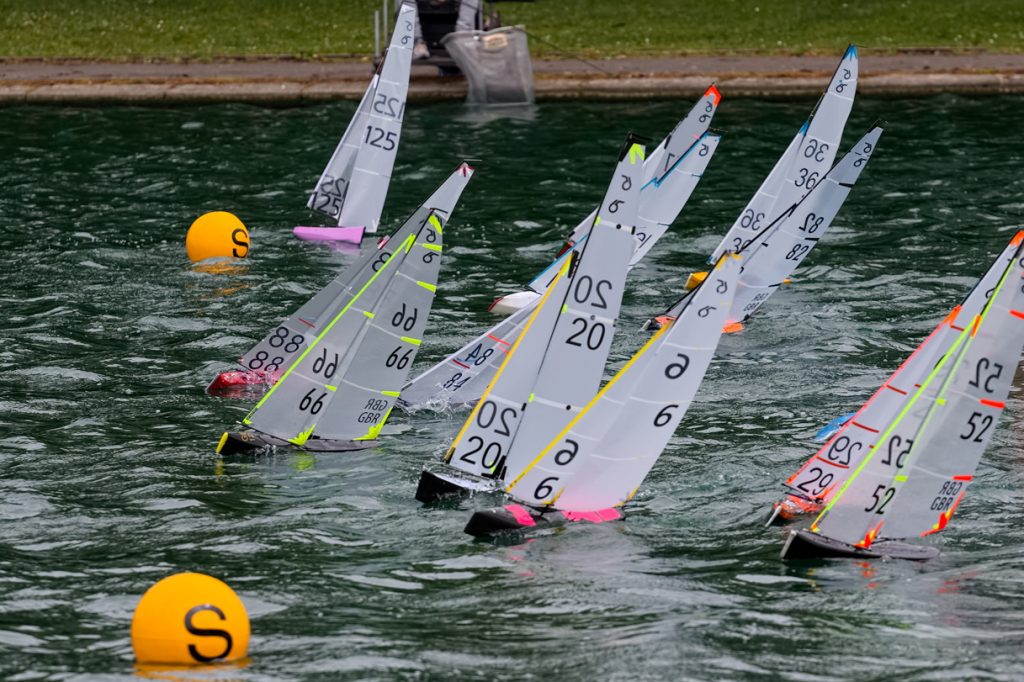 Saturday started with a steady west north westerly wind blowing down the lake, with occasional lulls and stronger periods. Race Officer Peter Baldwin set a standard windward/leeward course and a gate at the bottom to allow for some decision making on the part of the competitors. The wind was a little fickle at times, but decreased in strength during the afternoon, making things difficult for some with the sudden appearance of thread algae sticking to fins and rudders. At this point a tea break was called (it was then observed that the anemometer direction vane was going around faster than the rotating cups!). However after less than 30 minutes sufficient wind returned and the day finished in sunshine with the wind increasing and fortunately none of the forecast showers reached us all day. The day ended with a productive AGM attended by a majority of the skippers. 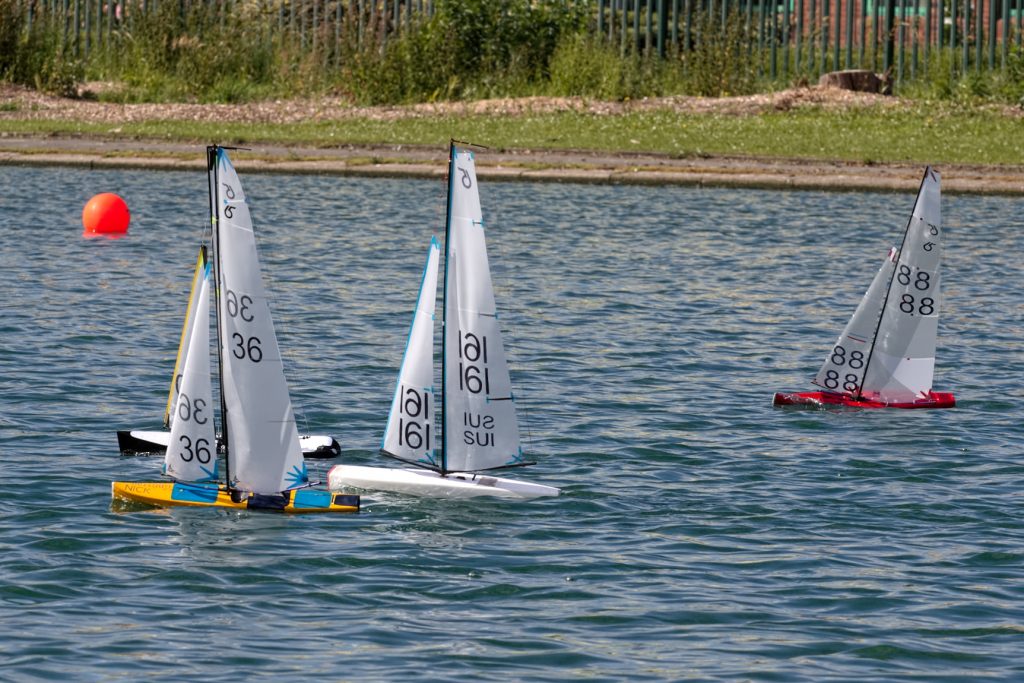 At the end of the day, nine races were held in two heats, with Dave Potter being the model of consistency with 3rd being his lowest place and Mark Dicks snapping at his heels, but Graham Elliott holding the overnight lead with five 1st places.

Sunday dawned with hopes of more wind than Saturday, although with light rain forecast until late morning. Initial signs looked good at 8am, but by the time of the scheduled briefing, the wind had disappeared to almost nothing again with light to heavy drizzle, making for a very wet practice session. At the briefing the Race Officer gave out the weather forecast and suggested that there would be a delay whilst the wind picked up. Almost on cue (and from the shelter of the clubhouse), one bright spark noted that the trees were now moving outside. Verified as being sufficient for racing, the course was setup and racing got underway in about 5 knots of breeze with only a 15 minute delay to the schedule. 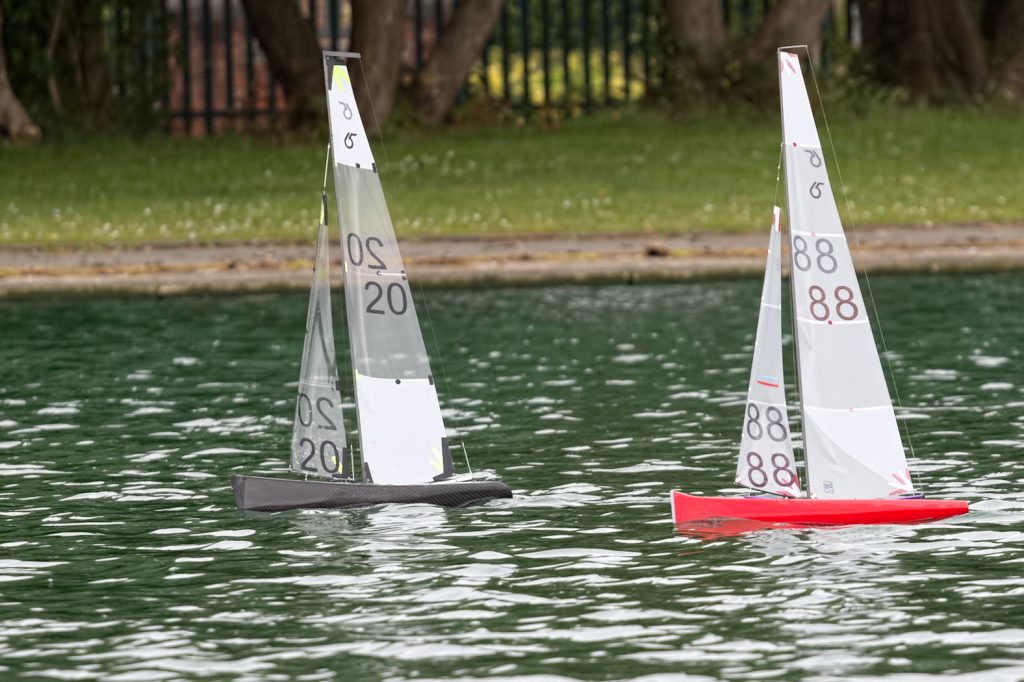 Graham Elliott continued to dominate the fleet as he had done on the Saturday, with Dave Potter and Mark Dicks also continuing to do well in most races. However, Dicks was the more consistent performer on day 2 with Potter picking up some higher scores. Some sailors opted to sail up to the control area shoreline and dip the boat to release any build up of algae before getting underway again. Later in the day, one sailor was a little too aggressive with his dipping and managed to snap his mast at the forestay attachment point. Fortunately, the wind was now strong enough to allow little or no loss in performance by using his B rig in the next race. 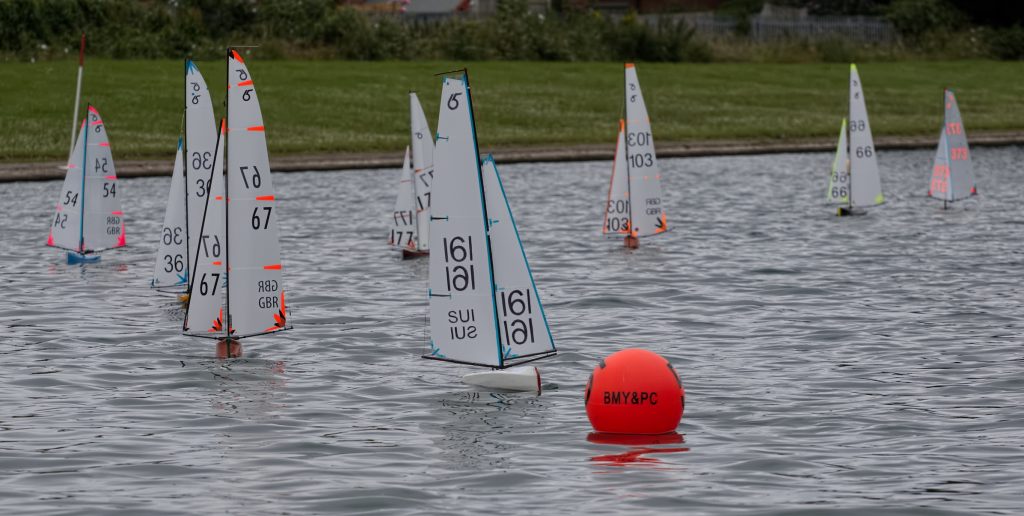 After sailing in two heats for 3 races on Sunday, the Race Officer called a competitor meeting and sought views on sailing as a single fleet. A good majority of the fleet thought that it would be worthwhile and so the marks were re-set by the day’s “man in waders” – Martin Roberts. The fleet were generally well behaved on the start line, even with the larger numbers in a single fleet and only occasional recalls had to be signalled, with the fleet usually getting away on the second attempt. Racing stopped once lunch had been collected and 15 races had been completed. The wind had now picked up to about 8 or 9 knots, with only occasional lulls. At this stage, the podium positions had not changed from the overnight positions, but Tobias Laux had moved up to 4th from 7th and Liz Tushingham moved up a place to 5th, both having strung some good consistent scores during the morning session. 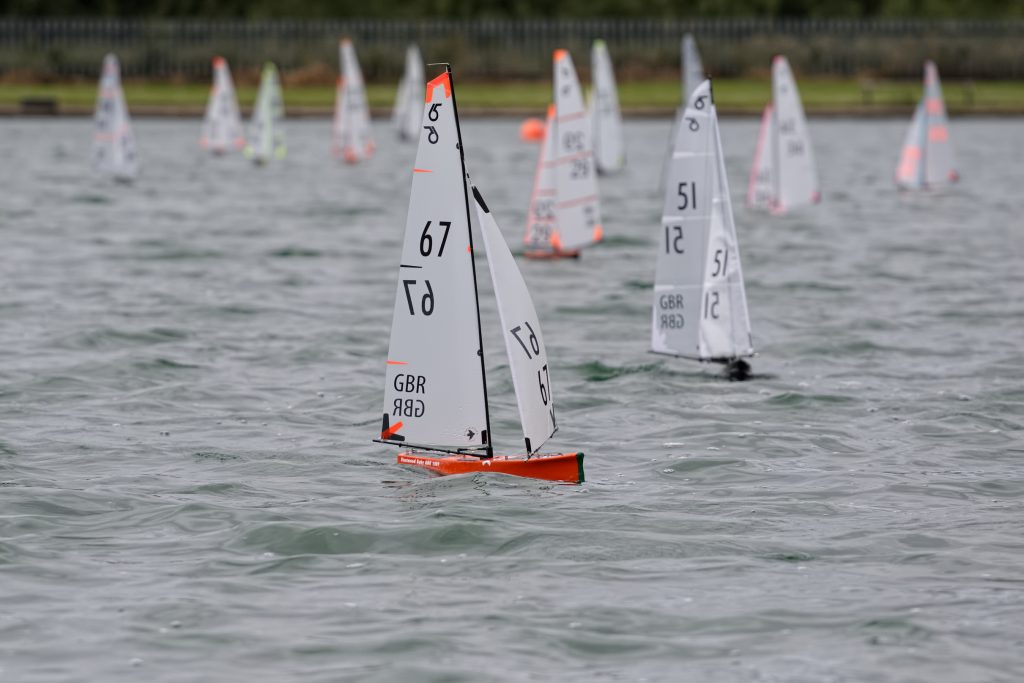 Lunch over, the fleet were back out for the final push to the end. The wind slowly increased during the afternoon reaching 10 to 12 knots on average by the end, but still generally down the lake with 10 to 15 degree changes during the course of a race. A few boats dropped out during this final session, due to issues such as the perceived lack of suitable rigs, failing fin assemblies or even failing legs, leaving only 20 boats racing for the last four races. However, the racing was still very tight at all times, with boats often finishing at a fast and furious rate. One race had at least 8 boats finishing within a 15 second window leading to some frantic writing by the scorer and difficult decision making for the finisher. 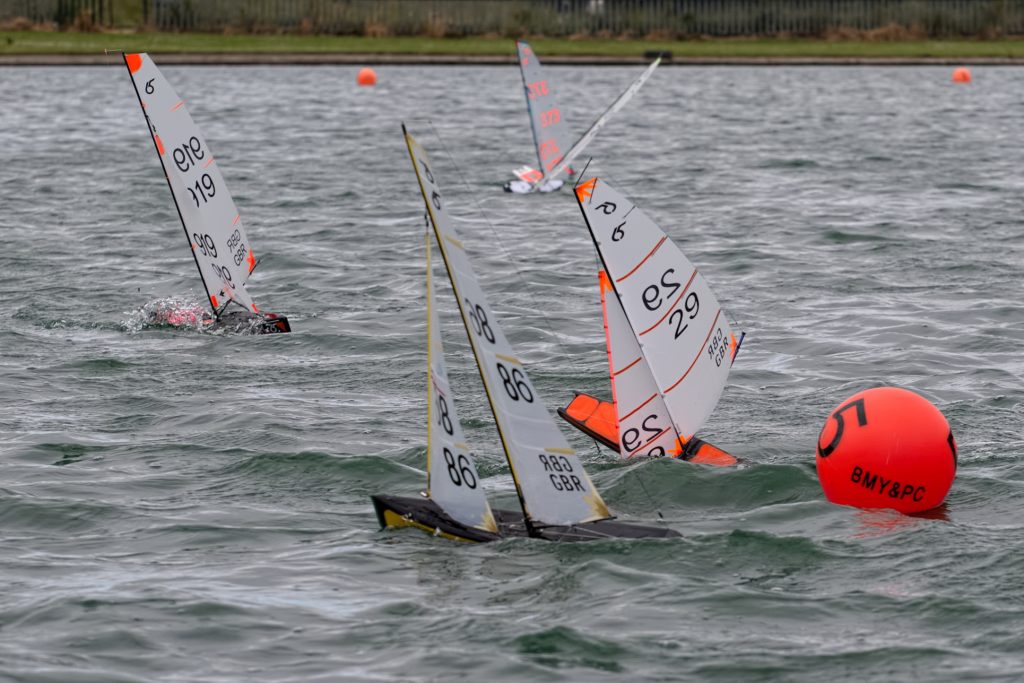 What of the DF65’s in the event? Well, they each had at least one good race and managed to either get into the A fleet or achieve 11th place when the fleet was all sailing together. As one skipper remarked “If I’d known that a Dragon could do this well, I wouldn’t have bought an RG and spent three weeks putting the rigs together”. It would have been good to see more of them racing, but those that did enjoyed the experience and were always in amongst the fleet in every race. 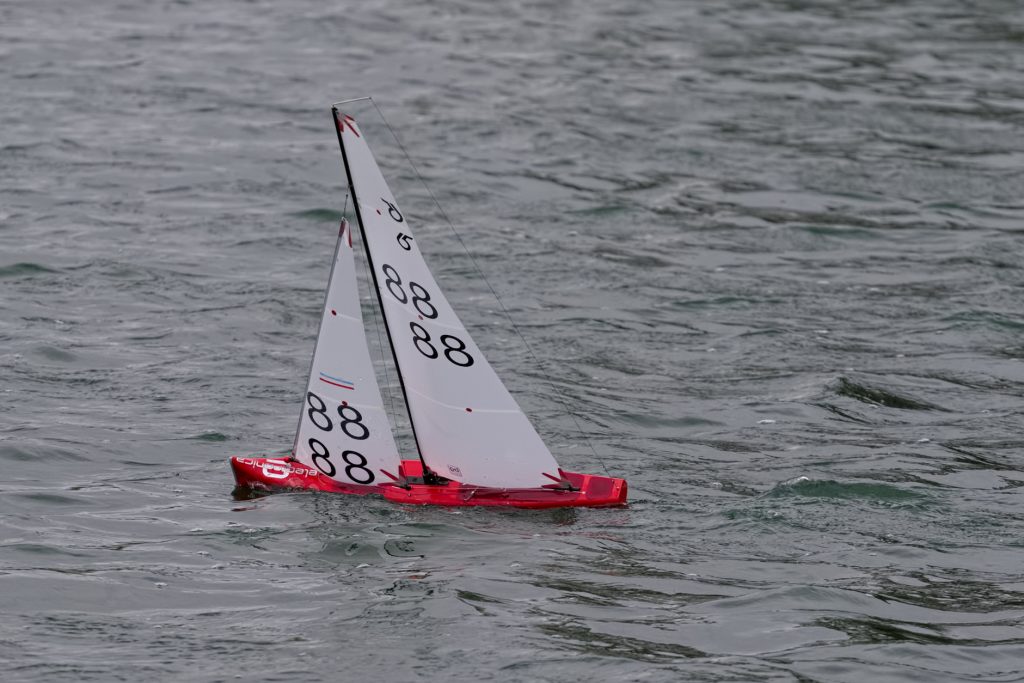 There were a large variation in RG65 designs competing this year, with the first 8 boats all of a different design. In all there were 12 different ones in a fleet of 20 (plus four DF65’s), with the most popular being the Fonix (4), followed by the Argon (3). A record was made of all boats sailed, rigs used etc and this will, in time, be placed on the RG65 UK class website for reference.


Before the prize giving started, Sailing Secretary Graham Elliott thanked all of the club members who had helped over the weekend. There was particular mention of the efforts made by Race Officer Peter Baldwin, recorder & scorer Judith, plus Bernie and Jack.