After a well earned rest for the tired skippers, the second day of this years IOM Veterans Championships started in the same conditions as day one finished….a light south-easterly. with plenty of shifts included to catch out the unwary!

The 34 sailors had a day of tough competition with increasing wind and temperatures to look forward to. Would defending champion Tony Edwards be able to make inroads into Phil Playles commanding lead? Would any of the home team be able to get onto the podium?

Racing progressed smoothly through the day managed by Graham Elliott, Brad Gibson and Martin Roberts with the same course proving satisfactory throughout the day though the swinging breeze needed constant adjustments to the start line. The wind increased after the lunch pause, as forecast, providing entertainment for both helms and spectators alike as the fleet struggled to hold onto their top suits. 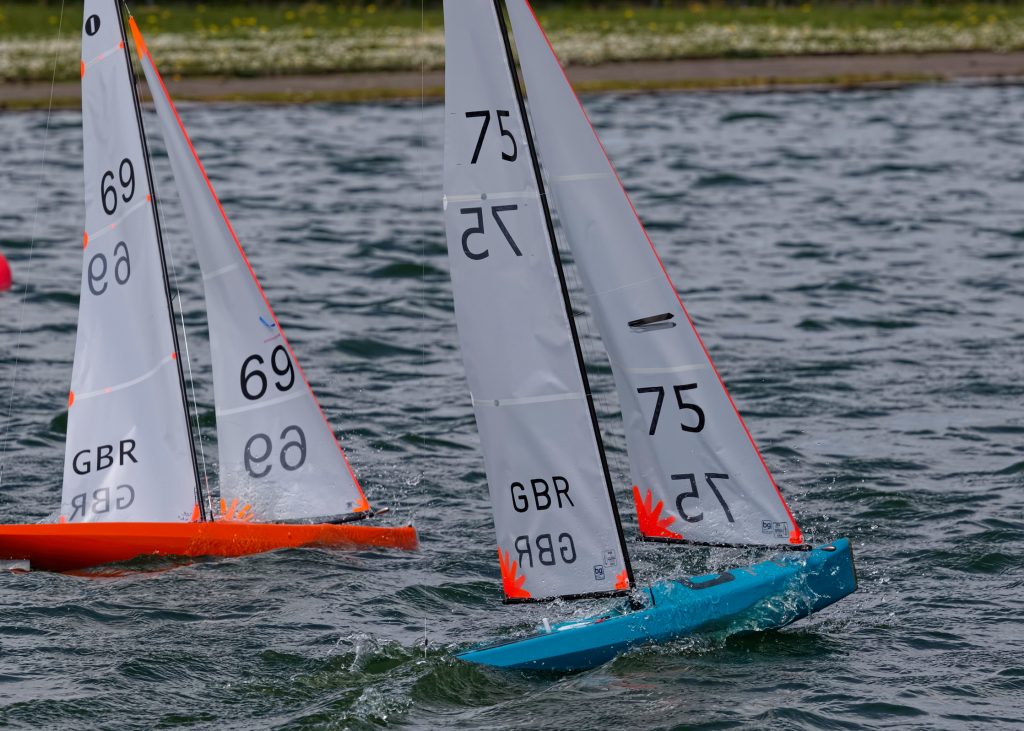 The stronger conditions didn’t seem to suit the front runners as much as some others in the fleet….notable gains being made by David Alston’s V9 with home Commodore Bill Culshaw also revelling in the breeze. Less fortunate was Simon Robinson’s home built V8 which suffered electrical problems which saw him fall down the order after a promising first day.

The podium looked pretty secure but with the final start sequence underway the Championship was still undecided. At the final whistle it was Phil who managed to cross the line sufficiently far enough ahead of a hard-charging Tony Edwards to hold onto his first day lead and claim the title with a consistent Mark Dennis in a comfortable 3rd place. With the Chelmsford visitors claiming first and 3rd spots, the podium proved to be not quite big enough to accommodate a member of the home team who’s best performer was John Brierley in a very commendable 4th in only his first year of model yachting.

There was plenty of emotion as Phil’s victory was warmly acknowledged at the prizegiving as was the contribution of all those who had made the event happen, in particular those of Graham Elliott who had lead the team.

Sunshine, testing winds from just sailable to top of A rig, close but friendly competition, excellent organisation and great cakes (thanks Andrea)……model yachting at it’s best!